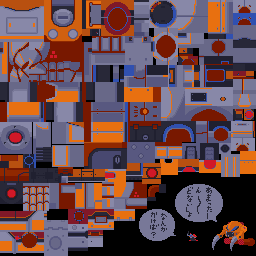 Mega Man Legends 2 (sort of) picks up where the first game left off, delivering more action, more digging, more unanswered questions, and a cliffhanger that will never, ever be resolved.

Both this game and its predecessor have numerous scribbles hidden in the textures. For instance, Mega Man's textures in Legends 2 have a hidden image of the mobile suit MA-04X Zakrello from the Gundam anime series talking with an unknown character (which is possibly RX-78-2 Gundam combined with B part of G-Fighter, appearing in an iconic scene together with Zakrello, with the beam rifle on its right and the shield on its left, after messing with the palette). The mobile suit says "Leftover space. Hmm... What should I do." "Why not draw something?" is the unknown character's response.