Yoshi takes center stage in Tetris Attack, a puzzle game that really doesn't have a whole lot to do with Tetris at all. That's because it was originally Panel de Pon, which had the misfortune of being a game about precious little fairies coming out at a time when most gamers were male and/or believed girls had cooties. It was re-branded, receiving additional changes and new features, for its US and European release, and this version was later released in Japan on the BS-X Satellaview service.

Despite an increasing amount of cameos and references in other Nintendo games, most prominently the Super Smash Bros. series, the original Panel de Pon stayed in Japan for nigh-on 25 years until getting an international release via the Nintendo Switch Online service. Before EarthBound, even!

Found Only in Tetris Attack

These tiles indicate that these larger blocks would have used a mixture of bumps and craters rather than just bumps. Most intriguing of all, the blocks would have also had Shy Guy faces! The tiles are loaded in the spot where the second player's garbage block graphics were located in Panel de Pon.

This graphic reading "Yoshi" is loaded in VRAM alongside the graphics used for the title screen. Perhaps it would've been used had a different title been decided for the game.

Found Only in Panel de Pon

A speech bubble reading "LET'S GO!" (in English) gets loaded in VRAM alongside the sprites for Lip in VS. Mode's overworld.

It also contains an extra tile that can be used to arrange it in a way that lacks the "tip" that would point towards Lip.

In Tetris Attack, the majority of the tiles that would've composed this speech bubble have been overwritten by Yoshi's head.

As mentioned above, the conversion from Panel de Pon to Tetris Attack resulted in a fairy large number of differences.

For the sake of marketability, Tetris Attack replaces the original cast with various characters from Yoshi's Island.

Panel de Pon also has captions beneath its select-screen character mugshots, which were cut for Tetris Attack due to some of the names being too long to fit.

Interestingly enough, Sanatos' laugh did survive the localization change, but was pitched down and reused for Bowser.

Besides the usual replacement of Lip with Yoshi, Tetris Attack uses a completely different sample for the "Nintendo!" voice.

Both games have completely different title screens and intro sequences. In Panel de Pon, Lip and... that flying dandelion thing appear in a circle of stars before the logo "wavers" in. In Tetris Attack, Yoshi rises from the bottom of the screen and flashes the peace sign before a circle of (more colorful) stars reveal the background behind him.

Tetris Attack updates the copyright text, adds developer copyrights, and notes that the use of "Tetris" is licensed from The Tetris Company. "Push any key!" was also redrawn for some reason, and flashes pink and blue instead of bobbing up and down.

Yoshi no Panepon has comparatively few differences from the Tetris Attack title screen, besides the altered logo. Since the Tetris licensing text is no longer applicable, it has been replaced with a message advertising the Game Boy version.

Tetris Attack's title theme is reprised from Yoshi's Island, while Panel de Pon has a calmer original theme instead:

The controller buttons in the menus are red and yellow in the Japanese and European versions, these were changed to purple in the US release.

Where Tetris Attack lets you access game options from the main menu, Panel de Pon normally doesn't, featuring only four items on the menu. However, a slot for the options menu does still exist in Panel de Pon, complete with corresponding dialogue:

The Pro Action Replay codes 83C7DC04 + 83C80028 + 83C80104 allow you to access the lost Panel de Pon options menu by scrolling to the (invisible) fifth menu item and pressing A. (Normally, because of the way the game's menus work, trying to select the fifth menu item without using both codes would simply send you back to the title screen. For similar reasons, trying to go from the main menu back to the title screen with the second code enabled without the third code makes the game hang, so be careful).

Both Tetris Attack and Yoshi no Panepon feature the option to switch the text between English and Japanese, but this does not affect graphical text (such as menu options). In place of a language select, Panel de Pon has the option to adjust the time limit for Time Trial (called "Score Attack" in this version).

In addition, where Tetris Attack has the option to turn combo/chain markers on and off, Panel de Pon has a secondary "Etc." menu containing this option as well as three settings which determine the game level (not the CPU skill level) of each difficulty (except Super Hard) for a one-player Vs. game.

Interestingly, enabling the CPU switch for Player 1 has no effect on 1P Vs. mode in Panel de Pon, whereas enabling it in Tetris Attack allows you to watch a completely CPU-controlled version of the 1P Vs. mode (only without the ending).

The Pro Action Replay code 83CFB42F will restore this menu to Tetris Attack (albeit with some minor visual anomalies); after enabling the code, select the "mark on/off" setting and press A.

The character bios accessible from the options menu are used in Panel de Pon, too, but (normally) can only be seen by waiting on the title screen long enough - except for the two bios for Sanatos and Corderia, which can be seen after accessing the options menu but are otherwise unused.

In Tetris Attack, all garbage blocks use the same design only varying in color based on whose block it is (player one's blocks are blue, player two's are red), whereas Panel de Pon uses a unique graphic and color set for each character.

The characters' mouths move upon clearing a Combo or Chain in Panel de Pon. The cast of Tetris Attack is apparently made up of ventriloquists.

This stage has the greatest amount of redrawn graphics. The only thing that escaped unscathed is the tree serving as the playing field, and even that received a palette change and had the flowers blooming on it removed.

Yoshi's stage received a change in background music, based on the story theme from Yoshi's Island. Lip's theme song is still used during the various tutorial sequences.

The shading on the clouds in the foreground is slightly different.

The leaf on the branch in the background was shifted over slightly for Tetris Attack.

Thiana has a blinking animation that Poochy does not.

A couple of leaves on the shrubs at the bottom of the screen were moved around a bit and had their shading altered. The shrubs themselves are a bit darker.

Ruby's stage received an even more drastic makeover than Lip's, changing from a crystal-themed to stage to a flower-themed one. Strangely, instead of just using Lip's flower stage, the new stage is almost completely new, but still has some hints of the original design. The new stage frame is based on the grassy levels in Yoshi's Island, where Eggo-Dil is usually found. Also, Lip's flower icons for impending garbage blocks were reused for Flying Wiggler, to replace the now-unfitting jewel icons.

The lily pads on the bottom-left of the screen were redrawn and/or moved to allow Froggy to sit on them, and are a lighter shade of green than they are in PdP.

A lily blossom was removed from the top-right.

The lily flowers in the background (not seen in the Tetris Attack screenshot) animate in sync in Panel de Pon, but at their own rates in Tetris Attack. The lily pads sitting next to them were also redrawn slightly.

One shade of green on the grassy ledges behind the playing field is darker in Tetris Attack.

The shading on the rocks around the playing field is a bit darker.

Gargantua Blargg has two Flamer Guy sidekicks, while Flare just has the one imp. She must be lonely.

Sparks of fire shoot out from Flare's hand when you score a combo or chain.

The star the alien creature/green Shy Guy is riding on was moved down and to the right and is orange instead of yellow. The same coloration change was made to the one at the bottom-right corner of the screen.

The jewels embedded in the border towards the top of the screen were darkened a bit for Tetris Attack. The coloring on the border itself is very slightly duller.

The star that used to spin around inside Seren's staff was moved closer to the Shy Guy sitting on Raphael's head and animates more slowly.

Interestingly, while Seren appears to be sitting on the edge of the moon, Raphael is standing on thin air! 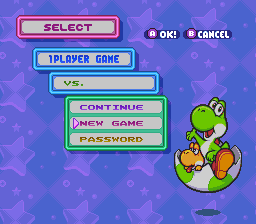 Panel de Pon throws you right into the story mode when Vs. is selected from the menu. Tetris Attack brings you to an additional menu which allows you to enter a password to begin from a certain level.

Since Yoshi isn't associated with flowers, the first stage was redrawn to be egg-themed.

Another interesting thing to note is that while Panel de Pon shows the name of the next opponent, Tetris Attack also names each character's partner. This is likely because said partner characters already had names, instead of being random animals or magical critters.

Panel de Pon doesn't play a unique music theme after a match in the game's versus modes; the stage's pinch theme rather awkwardly continues to play over the victory announcements. Tetris Attack uses one of two songs for these circumstances. In single-player, this depends on whether the player has won or lost; the "lose" theme is used in both games for Endless and Score Attack mode results and after clearing a stage in Stage Clear and Puzzle modes, while the "win" theme is an arrangement of a public-domain march tune. In two-player mode, the "lose" theme plays regardless of who has won.

Another screen that's completely different between versions! Tetris Attack‍ '​s screen doesn't feel the need to show you which opponent you just lost to, and has a larger and much more colorful font. Since Tetris Attack‍ '​s Vs. mode has passwords, one was added beneath the "Try again?" prompt.

In Tetris Attack, when Yoshi says "Nintendo!" upon starting the game, if you press B, A, L, L in that order, a confirmation sound will play and Time Stop will be disabled in single player for those looking for a bigger challenge. But what the game doesn't tell you is that without the code, the speed stops increasing after level 50. Meaning, even if you go beyond that level, the stack won't rise any faster. The code also disables the grace period when the stack is full in the VS modes, even in lower levels. However, in Panel de Pon, it does not disable Time Stop or the VS grace period. It only disables the level 50 speed cap. 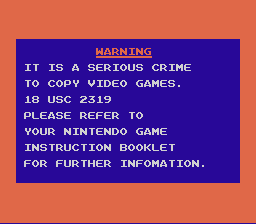 Like many later SNES games (including EarthBound), the game runs an SRAM check upon boot-up. If the cartridge contains any RAM - highly likely if one has used a cartridge copier - it will display the above screen and freeze. Notice that "information" is misspelled as "infomation" here.

The US and European releases of Tetris Attack additionally check for several signs of a "dirty" system state on boot that would also indicate that the game was being run from a copier.