The Legend of Zelda: Ocarina of Time/Unused Content in Used Actors & Objects

There are actually reserved data for pointing to display lists for weapons normally not used by both Child and Adult Link. Said variables are nulled by default, but a simple display list port combined with editing the usability table can restore these items to full functionality. This includes using the Boomerang as Adult Link or the Megaton Hammer as Child Link.

There is also a distinction between the Z/L-Targeting colors used for boss enemies and normal enemies, however they are both set to the same color in the final game. The colors are raw RGB hexadecimal values, and can easily be set to any color. 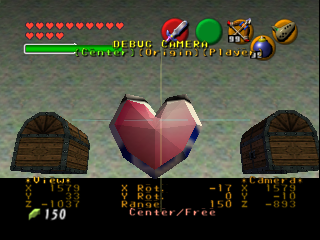 An early version of the Heart Container. Unlike the used iteration, it is almost completely opaque and does not have any animations. However, it acts as a normal Heart Container when collected.

This version of the Container appears in Room 119 of the Debug ROM, but cannot be accessed without a GameShark code in the retail version of the game.

Owing to the similarities between their names, it is likely that the actor for this object was originally Item_B_Heart. In the retail game, actor Item_B_Heart goes unused, but it is linked to a used object called object_gi_hearts, which contains the final Heart Piece and Heart Container. There are two copies of this model in the gameplay_keep file. 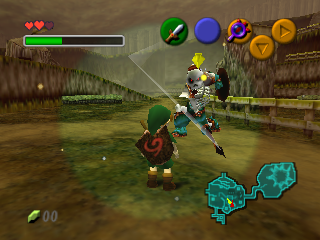 Variable 0000 is an invisible Stalfos that can only be seen with the Lens of Truth. 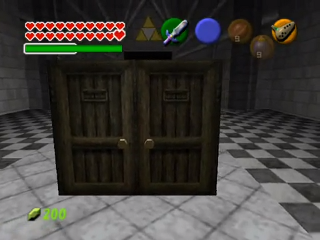 Double wooden doors exist in the game and work perfectly fine, but are not used. There are a few variations;

This door is slightly ajar, but slams shut of its own volition when Link approaches it. If Link tries to open it, a message box with blue Navi text appears, reading "It won't open!"

These doors may have been present in the demo version of the game available in Seattle at an event called the 1998 Toy Test, which took place in July and August 1998. According to a contemporary account of a Zelda fan known as David C., when he visited Kakariko Village as Adult Link, most of the doors in the village were open, but when Link approached them they were slammed shut in his face.

One of these doors was seen on the E3 1998 demo's Kakariko Village as well. 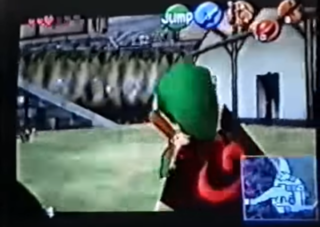 An unused version of the Great Fairy that is stationary and has no animations. Its lack of movement may be linked to its filename, Dy_Yoseizo, which translates to "Great Fairy - Fairy Statue".

This alternate version of the adult Dodongo has smoke and fire come from its mouth during the death animation. 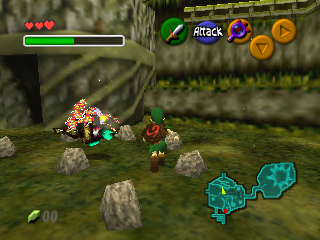 This Gohma Larva comes in an invisible egg that cannot be revealed, even with the Lens of Truth. 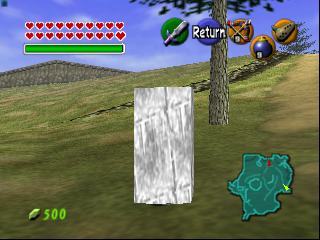 Variable 0000 is a rectangular box with no behavior or collision. 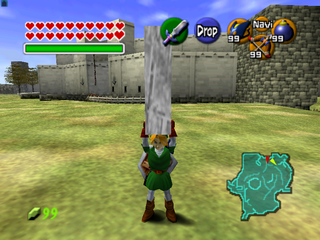 Interestingly, although Link cannot raise or throw it, if it were possible, it would fit perfectly in his hands and on his head. 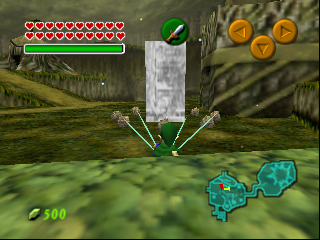 Variable 0001 is a slightly larger rectangular box with an oversized collision radius.

Uses the same model of variables 0000 and 0001 but is larger than the rectangle of variable 0001, including the collision. 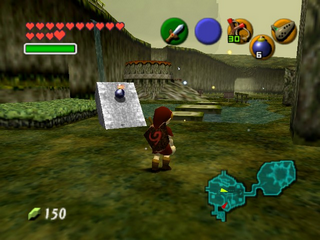 Variable 0003 is a rectangular box that lays horizontally on the ground, motionless. Once an object or character is placed upon it, it springs to life, rotating until it is vertical, then switches back to its initial position.

Variable 0004 is a larger version of the rectangular box in variable 0003. 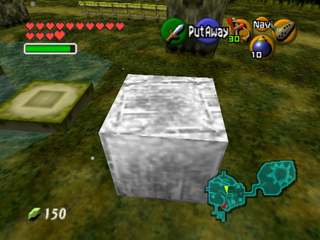 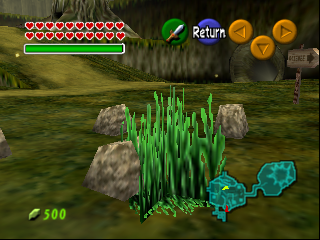 This grass has a slightly-oversized collision box. Its appearance is similar to the flora used in the Castle Courtyard moat. 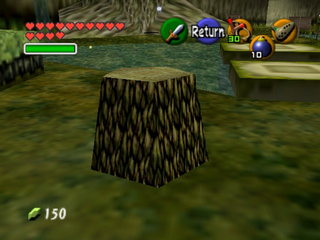 Variable 0008 is a tree stump with a collision radius four times its size. When struck, it sounds as though Link has hit a wall with his sword. 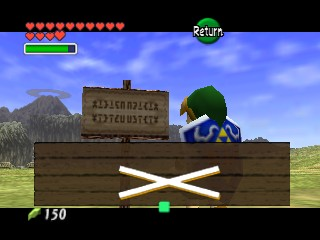 Psuedocode for the Cucco's behavior:

Compare with the cow's behavior:

Note that unlike the cow, the Cucco does not care about Link's age.

Variable xxxx is a huge tree that resemble those seen in the Lost Woods during the opening cutscene of Majora's Mask. Similar trees can be seen in Kakariko Village in pre-release screenshots from February, 1998. 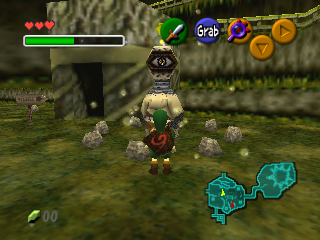 This Beamos does not fire lasers at you. 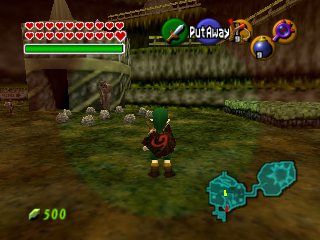 This ReDead is only visible with the Lens of Truth. When it is loaded, it plays an animation that suggests it is rising out of a coffin, like the Gibdos in the Bottom of the Well.

This actor contains 4 color slots to use in pushable blocks, however some block colors were not used. Others are just black blocks that fill the empty space the developers didn't intend to use, found in Dodongo's Cavern, Forest Temple and Fire Temple. 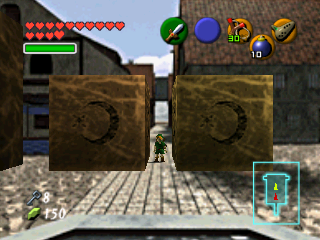 Fire Temple block colors, on the left side, unused, the right is used. 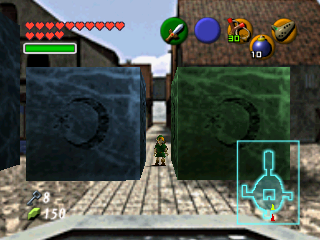 In Water Temple, yellow and purple blocks are used, but not blue or green. 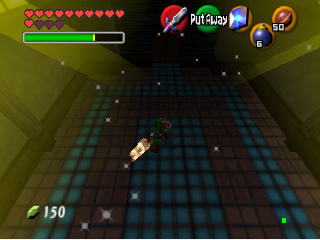 Eff_Dust is used when Link charges up a spin attack, in order to produce the effect of the energy being absorbed by his blade. An unused variable within the actor triggers a sparkle effect which doesn't dissipate, thus causing the game to slow down and eventually freeze.

Variables 0001 and 0002 are the spawn parameters for the unused explosive Rupees. If they are spawned by the actor En_Heishi1, the soldiers in the Castle Courtyard Maze, the detection flag will be set to true when Link causes them to explode.

Variable 0000 is the spawn parameter for the Shooting Gallery Cucco and features some unique behavior: If the Cucco is hit during the game, it will approach Link, end the current round and reload the scene. The Cucco can be also seen in pre-release footage. 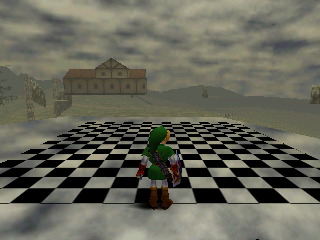 The first model of gameplay_keep, located at 0x3FC8. The squares make a 16×16 pattern, double what most chessboards have. May have been used for debugging purposes. 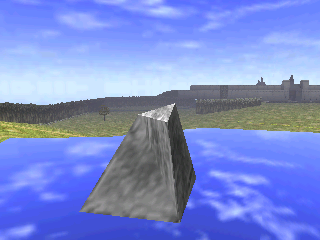 Located at 0x39E90, this model uses the unused white rectangles. 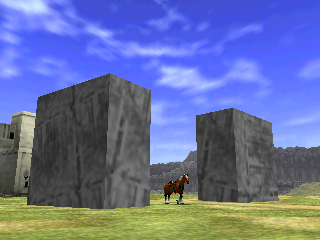 Located at 0x03A0C0, this model also uses the unused white rectangles but has a darker shade.

An untextured black shape located at 0x0547E0. According to its filename sourced from the iQue leak, it was used as a text box.

An untextured black shape located at 0x055810. According to its filename sourced from the iQue leak, it was used as a text box.

An untextured black shape located at 0x0567B0. According to its filename sourced from the iQue leak, it was used as a text box.

This fish has a body and a tail as separate models. Its fins are not rendered behind, which means that this fish would have been just for decoration.

This switch has the same texture as regular switches. Because of its large size and the fact that its coloring is reminiscent of the Fire Temple, it may have been used with the Megaton Hammer. The offset is 0x63F0.

This crystal switch has no animations. The offset is 0x77B0. 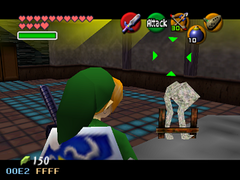 This hook, contained within the Forest Temple object file, once held up ladders that could be shot off their hooks like the one in the Deku Tree, without the cutscene.

Several unused trees and bushes are contained within the object file that holds Hyrule's plant life. Most are 2D images, but there is also an incomplete, textureless trunk section matching the type of tree that appears in the Adult version of Kakariko Village. 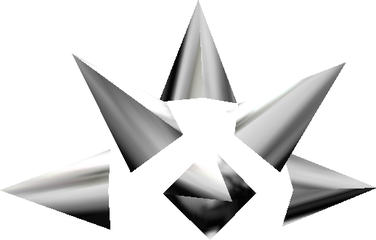 The object file that contains the Sliding Blade Trap also holds a small, spiky trap that has no linked actor. 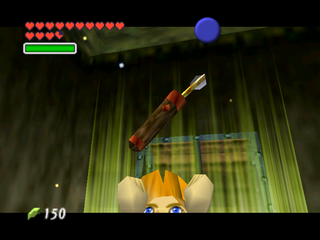 This object is used when Link gets the Big Quiver or Biggest Quiver. There is a version for a Bronze Quiver that is not used anywhere.

The object uses shader number 15 inside Link's file to define its color. 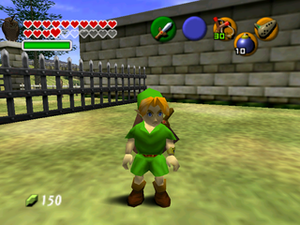 This image shows an unused color during the game.

Inside the object object_link_child is an unused color registration in each model of Child Link's tunic. The models in question have a 0xFA header to colors #50BC08. This color is present in several pre-release images. 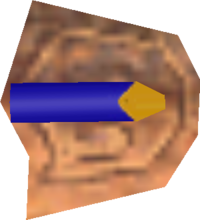 Unused display list for Child Link, this model is located in the offset 0x15010. This could have been for when Link was holding his sword without a shield.

The cows were initially supposed to, oddly enough, have cow rings. The ring was restored as seen in the video on the right. Interestingly, this made its way into the Japanese version of Majora's Mask and Ocarina of Time 3D. Located at 0x2628 in object_cow file. 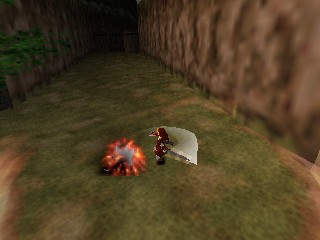 In setup 00 of Kakariko Village, there is an invisible Cucco near the tree. Presumably used for sound effects, the Cucco is invisible, indestructible, and begins to smoke when it takes damage.

Retrieved from "https://tcrf.net/index.php?title=The_Legend_of_Zelda:_Ocarina_of_Time/Unused_Content_in_Used_Actors_%26_Objects&oldid=1346949"
Categories:
Cleanup > To do
Subpages