The MISSING: JJ Macfield and the Island of Memories (Windows)

The MISSING: J.J. Macfield and the Island of Memories is a 2018 horror puzzle-platformer developed by White Owls and published by Arc System Works. The studio was founded by the director of Deadly Premonition and D4: Dark Dreams Don't Die, Hidetaka Suehiro (better known as SWERY).

Sorted with the images that appear during the game's text conversations, there are three unused images depicting Post-Game J.J.

Additionally, sorted with the pieces of concept art that can be unlocked, there is an image of these three unused photos in a row, with black borders on the top and bottom. The images appear to be upscaled. 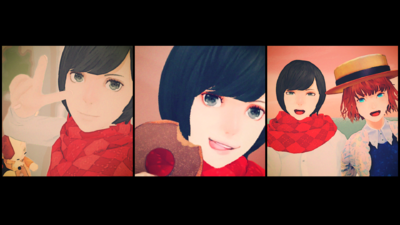 Naturally, there are images for each "chapter" in the Chapter Select menu. There are only 18 "chapters". There are 5 unused "chapter" images, chapter_20 through 23 use the same image. The former image looks to be some sort of debugging scene, while the latter images appear to depict an unfinished version of the area between the end of Route 65 and the beginning of the Little Shrimp Diner.

There are two unused variations of the logo for a demo. There was never a demo for The MISSING.