Natsume's debut title is an absolute insane (as in, it literally dubs itself as a "New Wave Psychedelic Adventure") parody of The Travels of Marco Polo, starring an insane high school student named Bunroku who, for his graduation, goes back in time to meet Marco Polo in 1275, with wacky hijinx ensuing. It's also easily one of the more disturbing of games for the NES, with creepy imagery and surprise jumpscares every other corner.

Has nothing to do with Touhou Project. 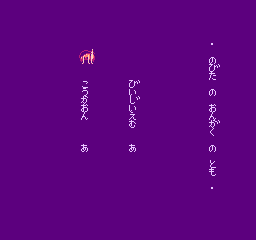 The word おかーさん (“mother” in Japanese) can be seen among the tiles used for the title screen. 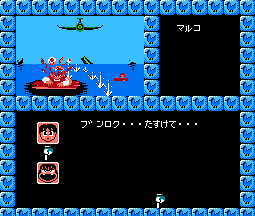 In an NFR (Not for resale) copy of the game there exists a surprisingly violent unused death animation for Marco.