Also with Jelly Belly brand jelly beans for some reason.

There are many unused graphics hidden in 3D Lemmings' data files; this list is not exhaustive, but does cover the most interesting discoveries.

These icons, found in GFX/ICONS.RNC, are likely leftovers from a level editor used by the developers.

These graphics are found (some of them, in duplicates) in GFX/SIGNS.000, GFX/SIGNS.002, GFX/SIGNS.003 and GFX/SIGNS.004. Most interesting are those containing the Sony and PlayStation logos. 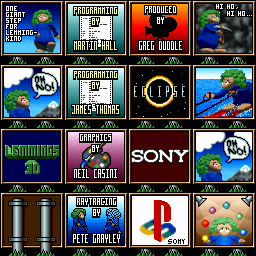 Every level file includes a hidden string identifying which level designer(s) created the level. This is not visible anywhere in-game; it can be found by decompressing the level files and using a hex editor, or via memory dumps, or via a level editor. In levels with multiple authors, these are sometimes abbreviated, due to a 31 character limit for this string.