688 Attack Sub is, as the title suggests, a pretty elaborate attack sub simulator ported from DOS. This version actually has extended gameplay in the fact that you have to control a slow moving cursor with a D-Pad! 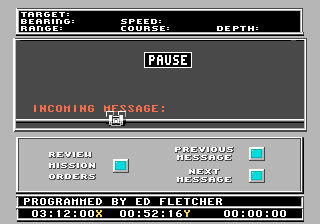 Pause the game while in one of the game screens with two status bars at the bottom (not the screen selection cockpit area). Hold A + B + C, and quickly tap Up, Down, Left, Right (you have to do this quickly, as if not letting go of the buttons and waiting between steps). If done correctly, the line "PROGRAMMED BY ED FLETCHER" should appear on the upper status bar.