From The Cutting Room Floor
< A Hat in Time (Windows, Mac OS X)
Jump to navigation Jump to search

Here you can view some of the models located in AHIT's files. There are a lot of obscure ones as well! However, most of these models can also be viewed in Hat Kid's toy chest and the lost and found box over at the Artic Cruise. Most of these models still have their animations, but also their actual classes! Who thought a little bit of digging through both categories could be so handy? 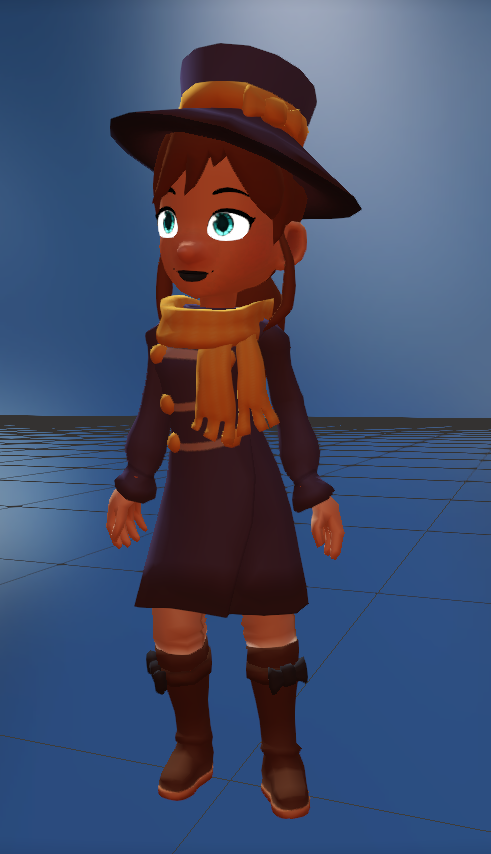 A grown-up version which was first seen when the player has completed the Beta Build of the game. Surprisingly, the model still has animations and a working script for summoning Hat Adult in the game's files, albeit deprecated. Other than that, this isn't the only case that we see this grown-up Hat Kid, as Hat Adult can also be seen on a scrapped collectible called the Moon Tablet. 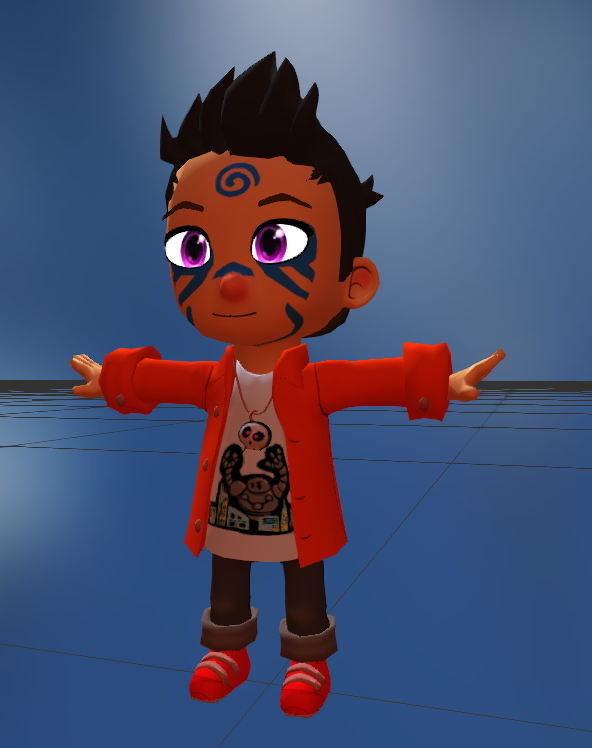 Timmy was originally intended as a villain-esque character with psychic powers that would hinder you in "Vanessa's Manor". His role was swiftly changed as he became Hat Kid's co-op character for a pretty long time. Just like Hat Adult, Timmy comes with a deprecated player script and his own hat (Which was used in the level "Ship Shape"). Other than that, he's hidden behind the ice cave in the credits. There was quite a lot of work done on this co-op partner, as voice clips of various characters addressing the main character as 'sir' and 'man' could also be found in the files. The last known modification on his model was back in 2016. 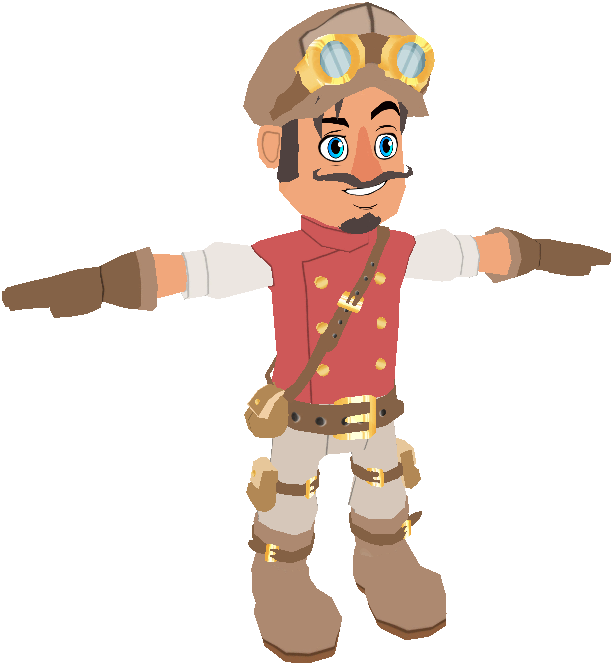 Thor was an NPC who is a tinkerer. In the "Far From Finished" Build, he appeared in Mafia Town Missions "Mafia on Fire", which was an early version of "Heating up Mafia Town", where he originally explained what was going on and gave Hat Kid the Pogo and Hookshot upgrades. He appeared in the scrapped Act "Repairing the Cannon", where Hat Kid would have met Thor and got a Time Piece for fixing the cannon to the Mafia's HQ. His model appears as a textureless and frozen victim of Queen Vanessa. He also had a hat that could have been obtained that was also cut. Interestingly, most of the things he made have been seen in some form, like the hookshot points in the final game. 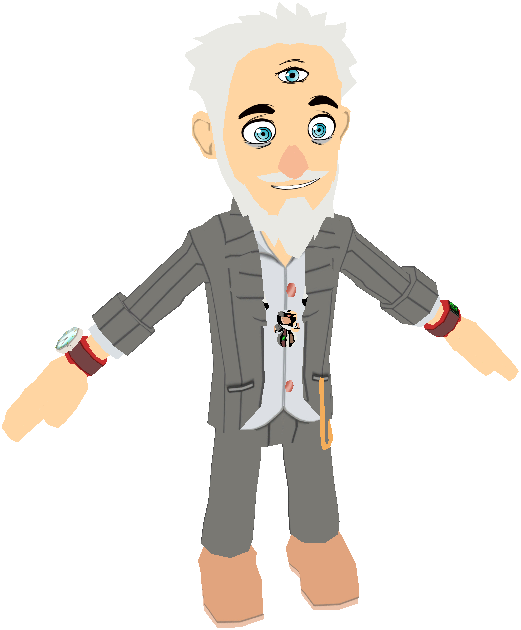 Tim was originally a Time Lord and originally was going to help Hat Kid along side his imaginary friend. In the prototype, he grabbed her before she could grab the umbrella and taught Hat Kid how to fight in a combat Tutorial where she would of faced Mafia Members. The Tutorial was supposed to bridge the gap between "Welcome to Mafia Town" and "Barrel Battle" as the area has a pre-destroyed Tailor Shop and lacks barrels. In the final game, he is a textureless, frozen victim of Queen Vanessa. Possibly he was cut due to the shift to a platformer/collectathon.

This NPC is internally named "Oldster", and was previously featured in Mafia Town's "She Came From Outer Space" act. Oldster was replaced with a goofy Mafia character. This model does appear in-game, but as a sad, textureless, frozen victim of Queen Vanessa. For posterity, the waistband on Oldster's undies says "Gears for Breakfast". 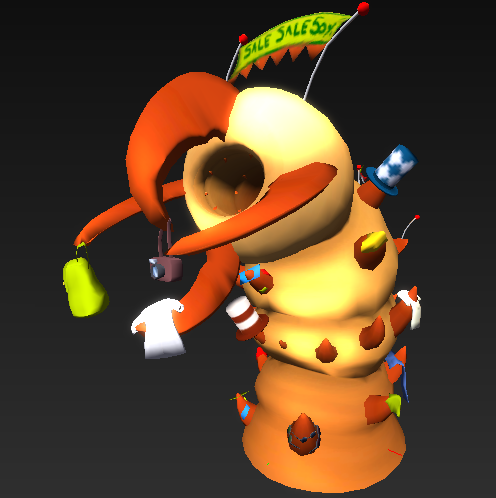 An NPC named "sandworm", likely intended for "Sand 'n Sails". It's got a number of wares attached. This model does appear in the game, albeit shrunken down in Hat Kid's toy chest. It also came with voiceclips, but those have sadly been removed. 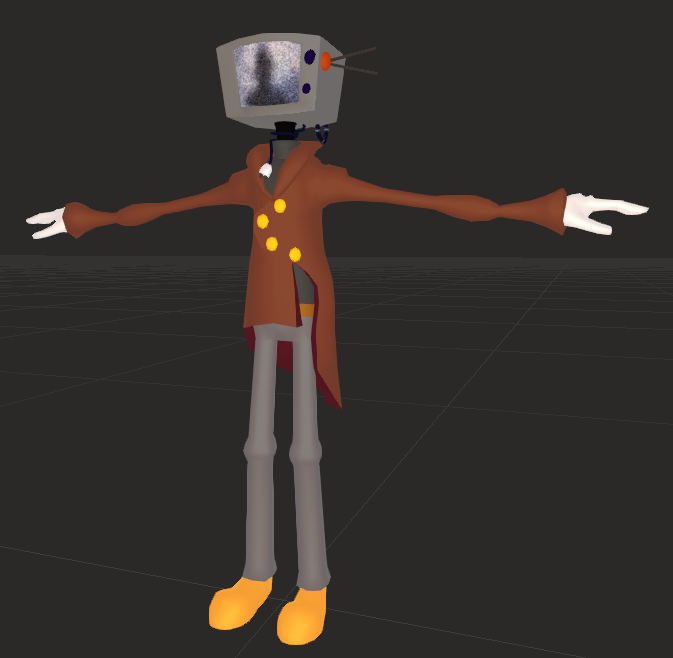 A cut person with a TV for a head. He would've been seen in a defunct zone called the "Twilight Zone", also known as "Mr. Tv's Playhouse", according to a cut titlescreen graphic. Not much is known about Mr. TV, as he was likely scrapped before the area was complete. This would explain his animation files or well... the fact that he has none!

No, these unused variations aren't wrongly marked as 'unused'. The alternate appearance intended for the chapter "Alpine Skyline" goes completely unused. Instead, it strangely uses their "Sand 'n Sails" designs. These alternate variations don't have the ability to change their colors and the heads in the unused version have been tilted slightly downwards. Upon replacing the models, these guys will look at the ground when attempting to look at you as some sort of weird side-effect! 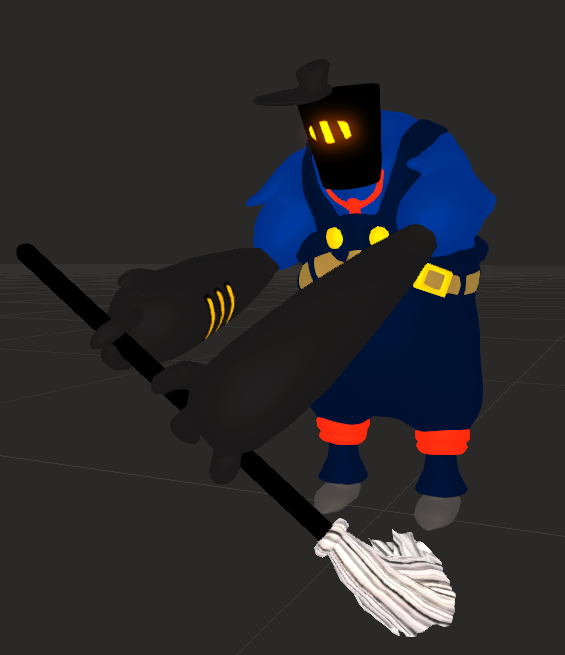 A robotic janitor that might've been built by Thor the Inventor. It was supposed to chase the player down in Mafia Town's "She Came From Outer Space" act whenever the player stepped into its line of sight. The bot would frantically swipe his mop at the player whilst running after them, similar to Queen Vanessa and the giant Alpine goats.

Another robot, but one who was meant to keep Hat Kid out of the water. Don't let that dapper look fool you, as this guy is quite a good guard. Other than that, he has a deprecated class as well, but they sadly do not function properly anymore, because Hat Kid's player script has removed a few variables within her script that the Mafia Shark depended on.

A not-so gross version of the rats seen in the "Mafia HQ". They look a lot like the fire spirits and have their own animation set. The reason for this specific version to go unused is an absolute mystery. 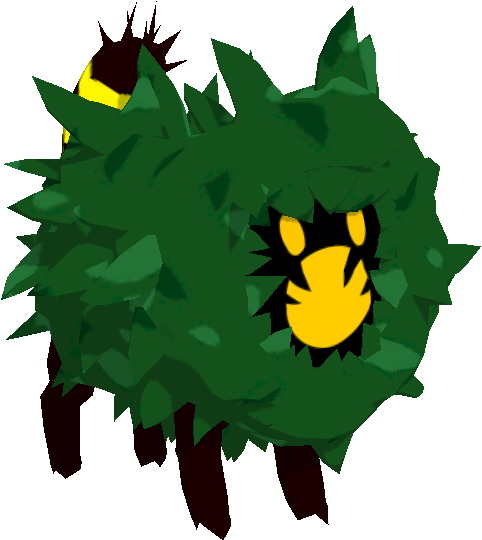 An enemy named Rough Patch that was cut very early on. The Alpha build contained a mesh file for Rough Patch, but no textures. Everything was restored for the final game, including animations. This model does appear in-game, but as a sad, textureless, frozen victim of Queen Vanessa. 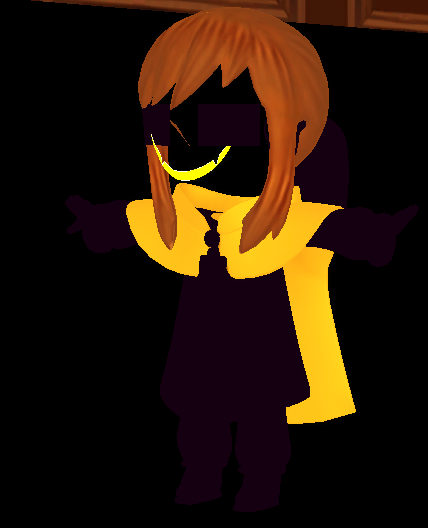 The Snatcher version of Hat Kid still resides underneath the floor where it's meant to appear in Vanessa's Manor. This character was completely cut from the game. Its intended purpose was to hinder the player on the last floor of Vanessa’s Manor. When defeated, Snatcher Kid would’ve let go of the key and Vanessa would finally go to the 3rd floor herself. 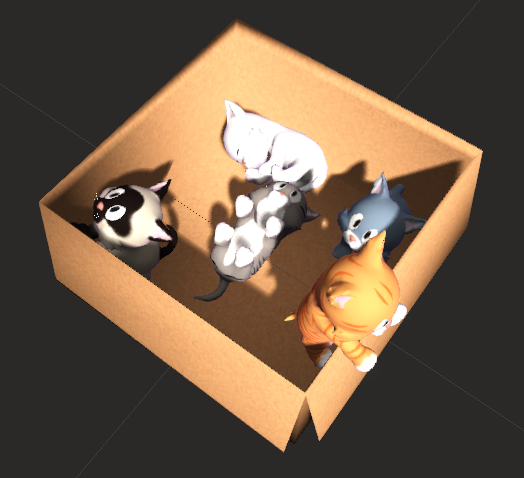 A box of kittens meant for a Mafia town sidequest. They only have an idle animation, but also had data for a MiniMission, which involved searching for these small little cutie-pies.

A cut level tablet with no real purpose. It features a drawing of Hat Kid and Hat Adult looking at what seems to be the moon. The figure on the left might be unknown, but if you translate the text under it with Habboi's ARG language, it says "Dream on Edison and Madeleine". Along with the drawing, this is assumed to be an Easter egg that references Banjo-Kazooie's predecessor, Project DREAM.

A pretty cool yet wonky vehicle meant for "Sand 'n Sails'. It has a socket for Hat Kid and a deprecated script for spawning the vehicle. It also has another variation, called the airship. This one has no idle animations, no sockets, NOTHING! But it is rigged. Separate models for the airship can also be found within the files, which do appear when visiting the workshop where the UFO-Believing Mafia Man stands during the act "She Came From Outer Space".

A traincat that was made before the final model was finished. It has no rig, but a lot of shiny textures and a long tail, albeit not so impressive. As you can guess, it has never been seen ever again, living in the shadows of its final model.