This is a sub-page of A Hat in Time (Windows, Mac OS X)/Version Differences.

The builds for the initial console releases on PlayStation 4 and XBox One are quite interesting, as they didn't release on the platforms until late fall of 2017, on December 5 for PlayStation 4 and December 7 for Xbox One. Despite the later release dates, however, the content that appeared in the games differed a fair amount from the final game that was released back on PC on October 5 2017. This is because the console builds were actually compiled before the game officially released, as they needed to be processed through Sony's and Microsoft's systems before being released. A small handful of changes were made to the game after these builds were compiled and at times the differences can be easily noticed in-game. Although no build date in them has been found as of yet, based on the content that is and is not present in the console builds, an estimated build date of September 20 2017 can be inferred, putting it smack in the middle of both prominent Speedrun Event builds. With this date, one could say that playing the initial releases of the console builds are like playing the Speedrun Event builds, but the full game instead of just three levels. It should be noted that these builds are no longer accessible, as they've been updated to match the PC version with additional content like DLC and bug fixes, among other changes.

Although most of the textures match the final game, a few actually differ either slightly, or drastically.

Hat Kid is still using her mugshot icon from all previous prerelease builds. It wouldn't be until the Speedrun Performance build, compiled four days after these builds, that it would be updated to its final design.

The same goes for the texture used for closed eyes for Hat Kid, except this texture got updated the day before the PC release, on October 4 2017.

In Hat Kid's spaceship, there's an easter egg that the player can find where one follows a series of notes hidden in areas that the player must use the camera badge in order to see. The final note in the console builds lacks a piece of text telling Hat Kid that she has a heart of gold. 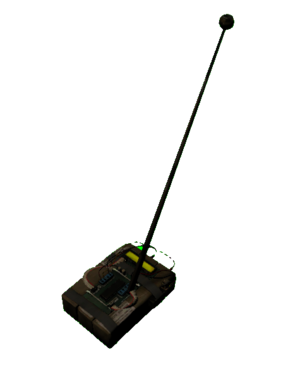 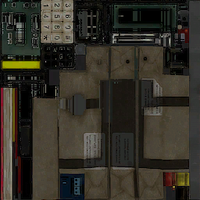 A placeholder bomb model from Team Fortress 2 is loaded only in the data of the initial console builds. This was used in the boss fight with Conductor/DJ Grooves as a placeholder for the bomb that appears on the player's back. Oddly, it doesn't appear in-game in those builds, suggesting the data is loaded a different way than usual.

Note that any animations shown here have been extracted from the initial console ports of the game, and have been imported into the current version of the final game's Modding Tools. The extraction process removes effects and footstep data.

The Sprint Hat and the Dweller Mask both lack flavor text when unlocked, for whatever reason.

The text for unlocking remixes in a couple Chapters were....out of date, to say the least. Oops. Unlocking one of the remixes for Battle of the Birds flat-out calls the Chapter by its old, Beta name: "Trainwreck of Science". The Sand 'n Sails text was meant for the sole remix made for the Chapter that went unused since the Chapter was scrapped, and was changed to reference Alpine Skyline instead even though no remixes exist for that Chapter in the base game.

The short description for Dead Bird Studio's Act had the words for Time Pieces split up and capitalized.

The invert camera option was updated to state that it only affected controllers.

The name of the rumble setting changed.

All instances were the Bird Movie Award icon appears in text in Chapter 2 omits the graphic in the console builds entirely because it wasn't made yet.

This text might've been changed to try to match how the voice actor for Conductor pronounced "rapidly". Despite the change, after the game released on PC, a few updates later changed it back to its console build spelling.

Conductor's final line in the Award Ceremony was adjusted to omit "were", so it matches the spoken dialogue.

A line from Conductor's hilarious rant outside of Mustache Girl's castle had its spelling fixed. 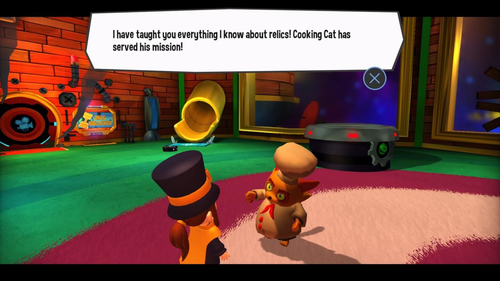 Cooking Cat's final line in their relic tutorial was shortened at the end, omitting the part that implicates a gender for Cooking Cat.

A line of dialogue that isn't present in any other build of the game. This is an unused line of text for the remnants for the scrapped Tourist and Crow Agent phase of the Mustache Girl boss fight.

A minor typo correction on "they".

Mafia Boss's intro lines for confronting him before the boss fight are the same as the Beta's, and were re-written with new voice acting for the final game.

A minor wording change to talking to Mafia Boss in his jar form aboard the spaceship. "it's" became "it is".

A few lines for the Mafia in the finale had some lines tweaked to either match the spoken dialogue or just for minor formatting changes.

A minor change of word order in the fake bad ending.

Minor changes to a couple of lines for Mustache Girl talking down to the player before the boss fight, adjusting them to match the spoken dialogue.

Typos in "unconcious" were fixed, and the bugbear now knocks you very unconscious.

A minor grammar formatting change to Snatcher's line before the second half of the final boss starts.

"Abilities" was changed to "hats", to match the spoken dialogue.

In the initial console release, for some reason, arriving at the Lava Cake via zipline did not make the Lava Cake peak's music actually play. Instead, it just keeps playing the 'lava' variation of the Alpine Skyline theme. Starting the level directly at the Lava Cake via the Act Select screen, however, does make the correct music play. Taking the zipline to the small area off to the side of the Lava Cake also fixes the music. This minor issue was corrected for the final game. 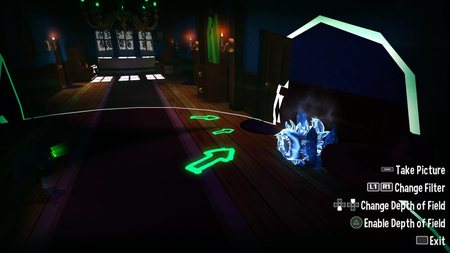 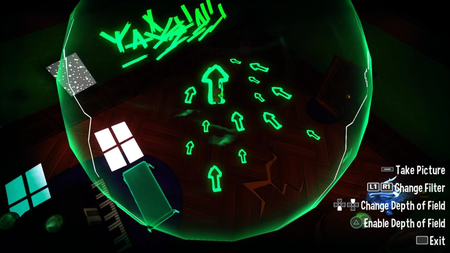 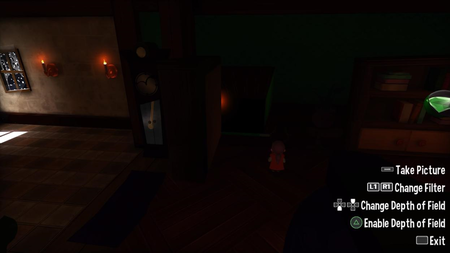 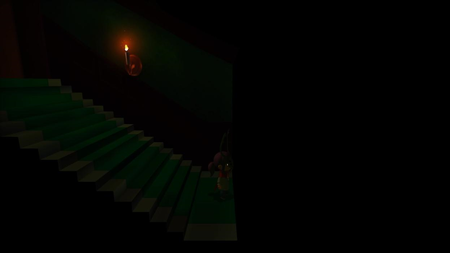 The secret bookcase that lead to a Secret level in the Beta builds still functions in the console builds, and even has a bunch of dweller arrows pointing to it. In the final game, the sequence is completely disabled, the arrows are gone, and the staircase behind it was deleted. Trying to walk down into the staircase in the console builds results in nothing happening. The full sequence can be seen in action here

A unique sound effect was not yet added for the brief sequence in Subcon Village where a Mafia gets sucked into a painting, resulting in the entire thing being awkwardly silent. 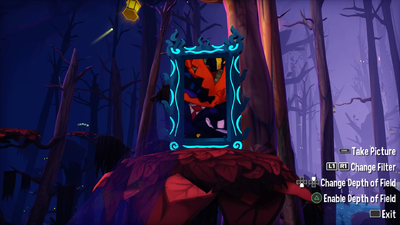 The blue bonfire in Subcon Forest in the console builds has an extra painting up in the tree above the bonfire, making a total of three paintings compared to the PC release's two. The painting also uses the normally unused Conductor painting texture, which can otherwise only be found in the final game's Modding Tools. 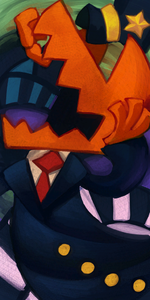 When delivering mail to the Subconites in Subcon Forest, shooting a piece of mail at them does not play the happy "confirm" noise that it does in the PC release. Rather, in the initial console builds, it simply plays the same squeak noise for when the player jumps on or attacks an NPC. The difference can be see here.

The dialogue for Mafia Boss just before the boss fight with him starts is the same as was in the Beta builds. All of his intro lines were re-recorded for the final game, and omit the lore about not having seen Time Pieces for over a hundred years.

A single Mafia in the market area of Mafia Town has dialogue that isn't present in the PC release. Half of his text doesn't have voice acting, which may or may not have contributed to its removal in the final. 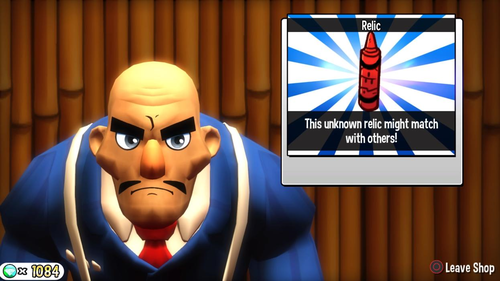 For some bizarre, unexplained reason, Hat Kid can purchase a relic from the juice bar in Mafia Town, making the console builds the only known builds to have this feature.

The ending for the level in Heating Up Mafia Town is completely different from the final game. Instead of Hat Kid hopping into a cannon to be launched up to a feast prepared by the Mafia, the Time Piece instead bursts out of the water geyser and lands where the level started. The particle effect for the explosion is also unused in the final game; it's still placed in the exact same spot that it can be seen in the console version, but it never triggers obviously due to the ending being redone. 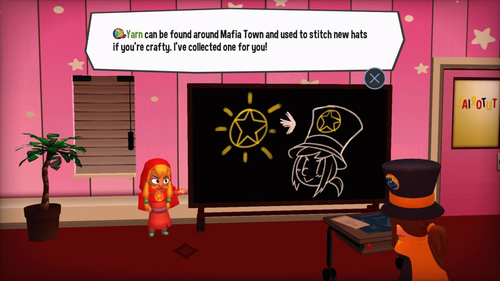 The tutorial scene for Mustache Girl teaching the player about Yarn includes an early version of the picture that should depict Yarn, but instead depicts a Badge. This same image for the tutorial can be seen in concept art.

The confrontation with Mustache Girl just before the boss fight with her starts lacks her changing to an angry expression when she's yelling at Hat Kid. There's also a camera close-up of her before it zooms out to show both Hat Kid and Mustache Girl, something that did make it into the final game, but was eventually removed in an update. The current version of the final game skips the close-up and just transitions straight to the shot of both of them. 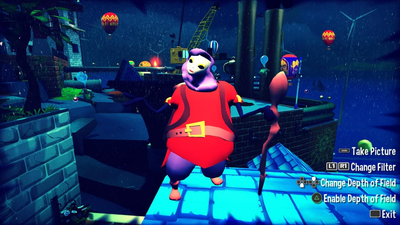 The Badge Seller not only sports his Beta build texture, but is also seen in a completely different spot compared to the PC release. He can be seen standing in this spot in prerelease screenshots.

In the initial console builds, after Mustache Girl turns evil and pick-pockets your Pons (not really), the gag where the friendship meter shows up and goes in reverse to say 'Enemies' at the end does not exist. This gag was added to the PC version at the last minute.

The Mumble Badge costs significantly more in the initial console releases, at exactly 1000 Pons! The texture used for the model of the Badge is also incorrect, with it using the Queen's Love Badge model texture, which is normally unused. Whoops.

A couple of the lines for the Conductor during his boss fight have him calling Hat Kid "darling", which is DJ Grooves' character phrase. The lines were edited in the final game to remove the word in both cases. The reason for Conductor saying this might be due to the wrong script being provided to the voice actor.

The unique Purple Rift music for Chapter 2 of the game was not made in time when the initial console builds were made. Thus, they use the music from Mafia Town's Purple Rift as a placeholder.

During the ending cutscene, when Hat Kid is pressing buttons on her control panel to stow away her Time Pieces, in the console builds, she says a few "beep"s and "boop"s, which stem from unused voice lines for her, but are actually all stored in one sound file for this cutscene. In the PC version, she only says "boop" as she presses the last button, and there's no "beep"s, either. The updated sound files for this part of the cutscene were re-imported the day after the Speedrun Performance build was built, and the reason for the change is unknown.

Retrieved from "https://tcrf.net/index.php?title=A_Hat_in_Time_(Windows,_Mac_OS_X)/Version_Differences/Initial_Console_Builds&oldid=1318134"
Categories:
Cleanup > To do
Subpages