Abadox is a tasty side-scrolling shooter by Natsume.

An unused frame for the stage 1 miniboss, depicting it with its mouth open.

A broken version of the pink crushers in the second part of stage 1. In the final game, they are completely indestructible.

A scrapped enemy that was supposed to appear in stage 5. Only its tilemaps remain in the ROM.

Some kind of item pod? It's stored with the rest of the powerup graphics. Only its tilemap remains in the ROM.

A top-down view of the annoying little alien hatchling that restricts your movement. This was clearly meant to be used when the creature latches onto your face in overhead stages, but the normal free-floating sprite is used instead.

Found among the number graphics for your score. The game was probably supposed to replace the score with "PAUSE!" when you pause the game, but it doesn't.

Apparently Parasitis (the thing you're going into in the game) was supposed to be animated in the intro. Instead, only the full shot is used and the animations to the left are not called upon. For a game that pulls off all the stops on the freaky factor, it's surprising they didn't code the animation properly.

There are five unused items hidden in the ROM. The "Z" item looks like a standard powerup, while the numbered items appear to be capsules of some sort.

These can be placed in the game and collected, but unfortunately, they have no effect (the code is literally nothing more than "play sound effect, exit"). If you want to see them in action anyway, or any of the game's other items, change ROM address 6F1D to one of the following values and destroy the first item carrier:

At the copyright screen (or the title screen in the Japanese version), press Left, Up, Right, Down, Up, Right, Left, Down (stage select only) or A, A, Up, B, B, Down, A, B (stage select, invulnerability, and maximum powerups), then one of the following button codes to start at the corresponding stage:

When using the second code, press Start twice at any time to get full shields, barriers, homing missiles, and the laser weapon. 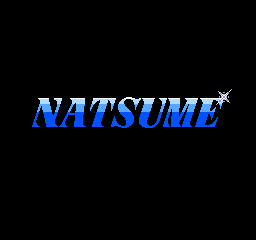 The Japanese version has a quick little Natsume intro screen, which the US version doesn't use, as it skips straight to the title screen upon starting the game. However, the graphics for the removed intro remain in the CHR ROM.

The title screen was modified a bit for the US release. The "PUSH START KEY" and "© ダイナミックきかく／まきむらただし" (Dynamic Planning/Makimura Tadashi) text were removed to make room for "MILTON BRADLEY PRESENTS", and some drippy gore was removed from the bottom of the logo. The US version also shows an additional copyright screen after pressing Start.

The big difference? The Princess is tastefully nude in the Japanese version! This was obviously changed for the US release.

In Abadox, each level uses a separate set of number graphics. However, bizarrely enough, they tend to be slightly different from level to level, usually by a pixel or two. This is most apparent in the second half of level 1, which uses a completely different font than the rest of the game, including the unused PAUSE! text.

For some reason, the bizarro 1-2 font is not present in the Japanese version!