Abscondee is a game where hitting fans kills you. 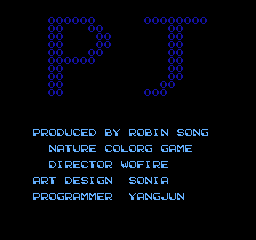 As with many Nice Code games, pressing Up, Down, Up, Left, Right, Left, B on the title screen will briefly display a credits screen. Nature Color Game (misspelled here as Nature Colorg Game) is one of several aliases used by Nice Code, and PJ most likely refers to the Power Joy series of Famiclones which many Nice Code games have been released on. The font used here was shamelessly ripped from Konami's Bucky O'Hare. 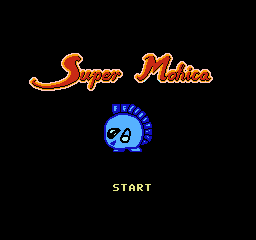 An alternate version of this game exists which replaces the music and most of the graphics. The code to access the credits screen was disabled in this version.

Oddly, the word "Out" on the time out message was shifted 4 pixels to the left to center it properly and the T is one pixel thinner than it is in all other instances.