An overhead Action-RPG, similar to Zelda.

There were once debugging commands assigned to various buttons (or button combinations), but the pointers to them were deleted in the final game. They can still be accessed by using game enhancer codes. 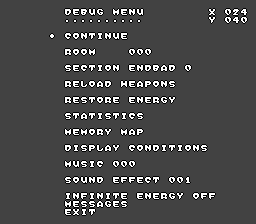 During gameplay, press Y to open the debug menu. Note that since these codes map the debug menu to the Y button, in order to view the Journal you will need to select it from the inventory screen and press A.

Resume the game (not the same as Exit, see below). 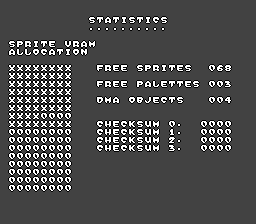 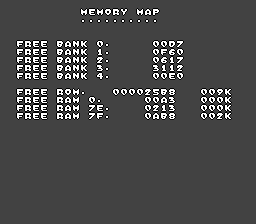 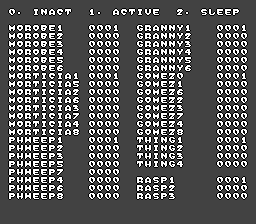 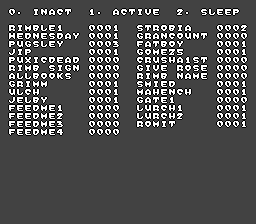 Show the status of story flags. Press X or Y to change pages. Press A or B to exit. The screenshots show the conditions as they are set upon starting a new game. 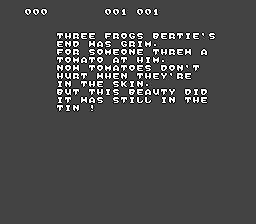 Displays every line of text from the game. Use D-Pad Left or Right to decrease or increase the text index, and Up and Down to scroll through the messages in a conversation. Press X or Y to change languages. Press A or B to exit.

Warps to the location set in ROOM and SECTION.

Use a value from the table below for xx and press Start during the game to view a cutscene.

Located at SNES address $808331-808335 is programming to display a text box. It expects RAM address 7E064C to already contain the 16-bit text index. Since this would require more than a few game enhancer codes to get working, you can instead produce an equivalent effect using Pro Action Replay (PAR) code 80FC8Cxx to change the text that appears when showing the "Hey I can't leave just yet." text box immediately when starting the game. The valid range for xx is 00-C1.

Press Start while playing to toggle the free movement mode on or off. Alternate Pro Action Replay (PAR) codes are 7E0A8EFF + 7E0A8FFF.

The debug menu, and the debug toggle WTW and collision detection requires memory address 7E0414 to contain #$5257 to access, which almost certainly is meant to represent ASCII RW for programmer Robert Walker. The debug inventory and many features of the debug menu require a non-zero value in memory address 7E0414 as well. This was likely done to provide various levels of access to the debugging features while the game was still in development. No non-zero writes to 7E0414 have been found in the programming of the final version of the game. 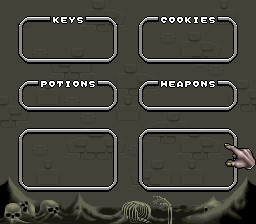 This cheat code managed to stay undiscovered for approximately 25 years. The first step is to hold Select while pressing Start to open the inventory. Once the inventory screen has finished loading, release Select and move the cursor to the item slot reserved for the Spider's Eye as shown in the screenshot above (3rd row from the bottom, last column). It isn't necessary to actually have the item. Next, hold L and Select, and press Right, A, B, Right, A, B. If done correctly, a sound effect will confirm success. Resume the game and the infinite energy cheat is now enabled. To turn the effect off, repeat the entire cheat process.

A number of options were deleted in the final release:

The memory addresses for Difficulty and Control are never checked anywhere outside the options menu.

These were fully programmed, and available in the options menu for the Genesis version, but were deleted for no apparent reason. However, the debug menu has a music and sound effect test of its own.

In the room before the final boss, Morobe offers an item: 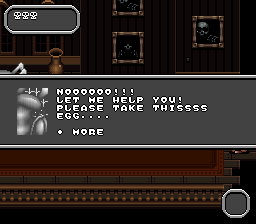 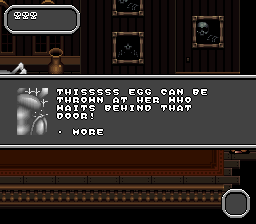 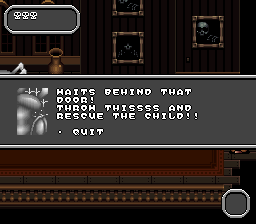 It explodes when Fester touches it, reducing HP by half: 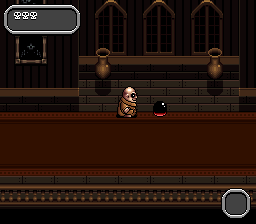 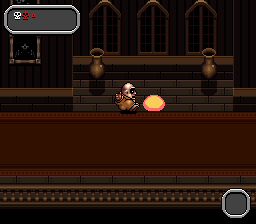 The dialogue suggests it was originally meant to be picked up (i.e, added to the inventory) and taken into the final boss room where Fester would receive a nasty surprise. The instruction manual, which details several prototype elements not found in the final game, has the following to say:

When thrown and smashed, a flurry of small spiders will attack Fester (best to leave alone.)"

This was likely changed either due to it making the battle too difficult, or being funnier to watch Fester immediately fall for the trick. 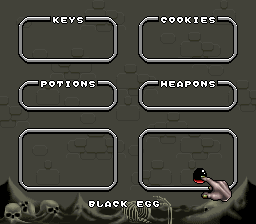 A spot is still reserved for it on the inventory screen, and although it can be obtained using the debug inventory code, it has no effect when used with the A button (the pointer is set to $0000 / blank). It's currently unknown if there's any leftovers in the programming for its old behavior, assuming that it was even worked on before the change was made.

Since it can't be picked up, this portrait for it goes unused. 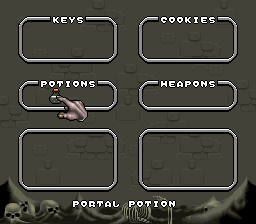 This item is completely unused, with no clues to its purpose found so far. The pointer to the portrait graphic and/or portrait palette is blank, causing the game to freeze when using an item modifier cheat to pick it up off the ground. When added using the debug inventory code, it has no effect when used with the A button (the pointer is set to $0000 / blank).

The other three potions share the same portrait but use different palettes; this probably would've done the same using a grey palette. 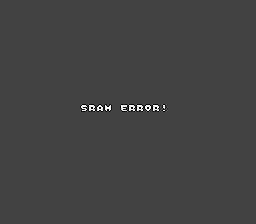 The game uses a password system and has no SRAM, but this error message can be displayed by forcing a branch.