Advance Wars 2: Black Hole Rising is the sequel to the surprise success, Advance Wars. The game was released a mere two years after it and there are notable amounts of carried over data and features between the two games.

There are numerous text strings lying about in the US version of the game. Most appear to be leftovers from translating COs names and game functions. These start at approximately 0x90F20 in the (U) Version.

Similar to Drake's ability that increases the likelihood of rain in random weather conditions, a table entry exists for each CO that allows for an increased chance of snow to occur in random weather, which is completely functional.

In Advance Wars, Sami's Double Time CO Power gave Infantry and Mech units the ability to ignore movement penalties on all unfavorable terrain. The table for this ability remains (for clear weather, snow and rain respectively) but has been overwritten by a duplicate of the standard movement charts for other COs.

Existing in the code is a complete version of Vs Sturm's Advance Wars CO Power - A meteor strike that does 4HP of damage. Not normally usable and completely unreferenced in terms of pointers, it is fully functional. It works the same as the Super CO Power version in terms of targeting and merely does 4HP damage. As the power is unreferenced, he gains just the standard defence boost of 10% with no stat boosts unlike the variants in both games.

There are five unused unit slots used in the game - several of which show slight resemblance to units that would be included in future versions of the game. All of these units have dummied-out statistics for movement, graphics, and damage, however retain some information for what was planned.

The Cruiser can normally only use its deck gun to fire at airborne targets. If set to fire at ground-level targets, it will tilt its gun in a fashion similar to the Anti-Air unit. The animation is unfinished, the muzzle flash does not align correctly.

The game supports neutral HQ tiles. Capturing a Neutral HQ will give that player an additional HQ of their own. A player will still lose if any of their HQs are captured, however.

An unused terrain which the detailed information panel claims is sea. It is terrain ID 9. The minimap sprites indicate it may have been intended to be placed under Black Hole inventions. It may also have placeholder information as an alternate naval tile. "湖" in the Info Panel indicates lake in Kanji character.

There are a complete collection of multi-tile rivers in the tileset, but only the North/South ones in Lost River are used in the game. In the second screenshot, it shows both the north to south, south to north, east to west and west to east variants. There are also 'center' tiles used if one wanted a river width of greater than 2 tiles.

The Lab has an undocumented behavior. While acting similarly to an HQ in every regard, it only ever appears in 2 player maps. If a player captures a Lab in a 3 or 4 player map and they don't instantly win, instead of obtaining all the lab owner's properties as they would by capturing an HQ, they merely fall dark.

An unused wallpaper image that can be found in the game. It appears to be related to the bonus images you unlock in the Sound Room by completion of the Campaign, but it cannot be seen in-game. It is located at 0x1D6458 in Advance Wars 2 (U).

Unused Campaign and Vs Features

Each sub-section of the Campaign (one for each of the countries) has an introductory event that sets the scene for the next series of maps. Because the Orange Star section is used as a tutorial in standard difficulty and is a normal series of maps in hard difficulty, the maps are treated as separate entries in the game data. The method of initializing the campaign appears to have changed at one point; because there are two subroutines that run the introductory event, however, the second one is never used and has no way to execute. The first instance is used for both normal and hard modes in the final product (0x76BC4). The unused block (0x76C64) has a specific check for whether the Hard Campaign bit has been set and will only execute if it's true, compared to the one used in-game where it doesn't discriminate. The only other difference appears to be some subroutine initialization variables.

The bolded information in the second code block is the hard-campaign specific check and the changed initialisation variables.

The game also includes an unused post-map event launcher (every single instance in the game's data tables is set to a null pointer). The behavior of this event launcher is to run once when a campaign map had been completed with either a victory or a loss. The campaign events on the world map screen in the final game are run using a different instance that is only run after a map is completed in victory. Each map's entry for this function is at offset +0x18 in the Campaign Table (Table at 0x615194 in the U version) and is a 32-bit pointer to Event code.

The game records how much money each player spends during the course of a battle. This includes both purchasing units and repairing them. In later games this is used for scoring, history data and challenges but it currently serves no purpose in game.

Similar to the Campaign, Hard Campaign, and War room maps, each map outside of these categories has an assigned 100-Point Speed Limit. This is indicative that at some point it was possible to play for score on every map in the game.

While not technically cut, each of these features were not discovered until many years after the release of the game, remain incredibly obscure and can only be performed under highly specific circumstances. 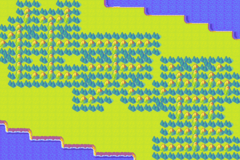 This is a relatively obscure feature. Holding the L and R buttons while opening the "Design Maps" function will automatically load a map which spells Nintendo in Japanese. It is identical to the version in Advance Wars.

If you attempt to place a unit in the map editor approximately fifty times in a row without success (by placing the unit on illegal terrain placements), a message from Nell appears:

In the very first campaign mission in the game, if you manage to somehow run out of fuel from all the units on your side, Nell scolds you and you lose the map. This feat requires a significant amount of AI abuse and forward planning to perform legitimately.

The typo in Andy's first line is present in the actual game.

For the maps Shark Straight and Royal Channel, the game uses special scripting commands to load unit lists. The scripting command (0xD) is used in the previous game Advance Wars to load units for maps with fixed unit lists. The pre-deployed unit list is in the Advance Wars format (0xB bytes per entry) instead of the newer format used in AW2 (0xC bytes per entry). It is unknown why the old format was retained and used, but support for the format is hard-coded to only allow the script command to run for maps classified as "Classic" or "Campaign".

In both Neil's power descriptions it mentions that on top of increasing luck damage it will cause multiple foes to get damaged like some other COs like Hawk, Olaf, and Drake's Powers. Though it does not causes damage to foes suggesting it was either planned or it's a miss translation.

Every unit the enemy builds is randomly assigned one of the 7 different AI type, with each unit type being differently weighted towards particular patterns, and every enemy predeployed unit has one set by the map. While 1 (Target enemy HQ), 2 (escort infantry/lander), 3 (capture properties), 4 (Aggressive), 5 (Defensive), and 7 (Protect own HQ) are used and functional, type 6 has a 0% chance of being used for any unit and is only assigned (fairly randomly) to two Medium Tanks in the level Drake's Dilemma that won't interact with the player. Despite this, type 6 is both fully functional and stronger than average. 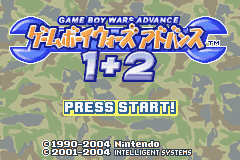 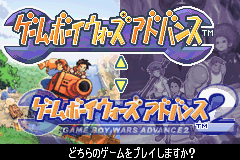 The Japanese version of Advance Wars and Advance Wars 2 were distributed together as Game Boy Wars Advance 1+2 in a single cartridge. The game has a unique game selector screen not seen in the US or EU versions.

For the two English translations of the game, the name of Adder's Super CO Power was altered. The US Version has the name "Sidewinder", while the EU release of the game has the name "Snakebite". Oddly enough, this change is not retained in the sequel Advance Wars: Dual Strike despite some regional differences in the EU version as well.

In the North American version of the game, Flak incorrectly identifies Bombers as an "indirect combat unit". This gaffe is fixed in the European version of the game, although it takes a bit longer to begin processing the word "direct". Oddly, the mistake was not corrected in the North American Wii U Virtual Console release. In addition to this, the hyphen was repositioned two pixels downward to better-accommodate for the lowercase letters.

Compared to Advance Wars, this game's localization made noticeably fewer changes to the CO designs.