Advanced Dungeons & Dragons: Eye of the Beholder II - The Legend of Darkmoon (DOS)

Eye of the Beholder II: The Legend of Darkmoon is a sequel to the original Eye of the Beholder game. In the second game, the party receives a letter from and subsequently meets up with Khelben Blackstaff about the Temple Darkmoon, where the party must rid the source of the evil of the temple; a Q (from Star Trek) lookalike.

There are three music jingles that aren't used but found throughout the various .ADL files in the game:

The first jingle is the same as the Success jingle, but played in the key of C rather than A.

The second jingle sounds triumphant, almost as if it was intended to be used for when the party accomplishes a task.

The third song is a modified version of the song when you face Dran Draggore. There were some instrumental and note changes made to the song.

An ominous jingle plays when Dran transforms into his final form. While the song is used, only the first few seconds of the song are heard, as the cutscene for his transformation ends after a few seconds, and the music quickly fades out.

In the game's file SOUT4.CPS (using SILVER.PAL) there is a picture of the Frost Giant King stabbing himself with the Talon's Tongue, with blood coming out of his stomach and mouth. However, the final image of the suicide is not used; instead, the game tells you after his speech that he "mysteriously turns to dust". The two images are also in the file SUICIDE.CPS (with the same palette), but the used version of the Frost Giant King image is the SOUT4.CPS one, which differs slightly in that there is a visible shine added to the knife's point, and the image seems to be a lot lower in colour quality than the SUICIDE.CPS version. The other two images in SOUT4.CPS (both showing a Beholder), and the third image in SUICIDE.CPS (a pedestal with a hand-shaped depression at the top), are all used.

The Amiga version of SOUT4.CPS shows the image of the king holding the knife (without shine on the point), but the suicide image itself is missing, and SUICIDE.CPS has both images of the king blacked out, showing only the image with the pedestal.

The way the scene was changed indicates that it was probably censored on request of the publisher after the game was already finished. 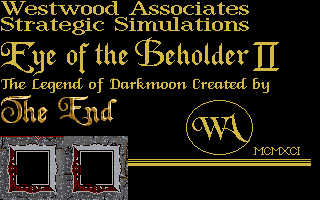 The game contains an unused Westwood logo in CREDITS2.CPS, as well as the game's release year in Roman numerals (MCMXCI = 1991). These were intended for the game's ending credits, but the game instead just uses the "Westwood Associates" graphic instead. There was, however, a demo for this game which used this graphic. FINALE_7.PAL was used as the palette file.