Eye of the Beholder is the first of a trilogy of 3D dungeon crawlers based on D&D. This was originally called the "Legend series", but the sequels omit this name. It draws inspiration from Dungeon Master, where EotB has better graphics and controls, whereas DM has better gameplay. A decade later, a heavily altered Game Boy Advance port was released.

This game is much less linear than most dungeon crawlers, as a series of magical portals allow you to teleport between levels, skip several of them, play them backwards, and so forth. These portals are adorned with eight symbols, and stone tokens matching these symbols are used to open the portals. Only seven such items exist in the game, the eighth (the stone gem) not appearing anywhere. 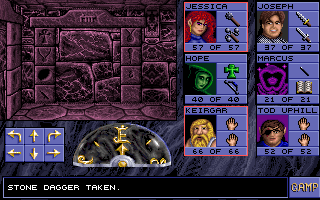 Curiously, a portal with a space for the gem does appear on Level 7: Upper Reaches of the Drow. However, as the gem was never placed anywhere, there's no way to open the portal. If you obtain the gem via a cheat code, the portal is still coded to activate and transport you to an unused area of Level 2 (see below). A hidden scroll on level 7 suggests that the gem portal leads you to the exit of the complex.

There are a total of five unused Mage spells in the original Eye of the Beholder.

There are four unused areas of note within the twelve levels of the Dungeon of Waterdeep.

Note: The following map images are taken from All-Seeing Eye, a third-party auto-map, as the MS-DOS version has no mapping feature.

In the first three levels of the game, there is an area in the upper-left of the map that can only be accessed through save game editing. None of the three levels contain any items or enemies and the areas in Levels 1 and 3 are largely inactive, though it seems like Westwood had plans.

Level 1's area contains two non-functional doors – one of which is impassible despite being open, a broken button, a shelf, and two "rubble" tiles (dark-brown on the map), and a downward ladder which doesn't function. 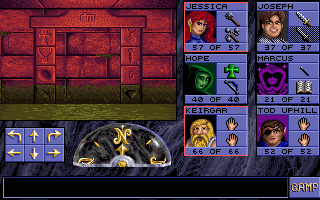 Level 2's area contains three more doors – two of which can't be activated and one that has a button, functional upward and downward ladders which lead to the unused areas of Level 1 and 3, respectively. It also contains a portal (pictured) which has no empty spot for an item. This was presumably meant to use the Stone Gem, but due to a coding error it instead uses the Stone Ring; when used on the Stone Necklace's spot (left side, second from top), the party is transported to the Stone Gem portal on Level 7. 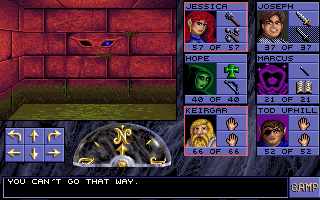 Level 3 contains a non-functional Eye Hole (pictured) which would likely open the nearby door, if either worked.

Given the fact that these three areas being interconnected, and that the only way in or out seems to be a portal door, it seems extremely likely that the player's party was intended to head into this area once they got the Stone Gem and went through the Stone Gem Portal, both mentioned above. Furthermore, one of the scrolls received from the Special Quest on Level 7 suggests that the Stone Gem portal leads to "the light of the stars", so perhaps this is how the party was meant to escape after defeating the final boss. 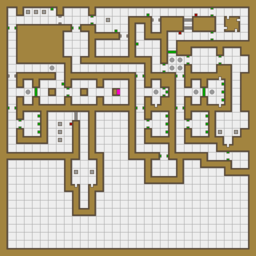 There is also an area on Level 12 which is just... a massive, empty void. It's possible that Westwood simply forgot to erase the empty rooms. 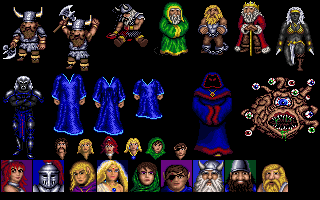 The sheet for NPC graphics contains several pictures that are inexplicably not shown in-game, even though the event that the picture is for plays out normally (showing an empty room and text). These include the jubilant dwarf (second sprite), chained dwarf (fifth sprite) and dwarven king (sixth sprite). Healing the dwarven king is an important sidequest.