A faithful port of the Genesis and SNES game. 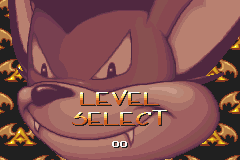 Use the Code 03002C30 000D just before the Atomic Planet Entertainment logo fades to bring up a Level Select. Deactivate the code before selecting a level.

The start of the comic was also modified. The Japanese version reuses the logo from the title and has a much darker background with tiled bats. The US version has a larger version of the logo with Aero's symbol tiled on the background in green.