Much like the 32X version of Space Harrier, After Burner finally got a "near arcade-perfect" achievement after years of watered down versions behind. 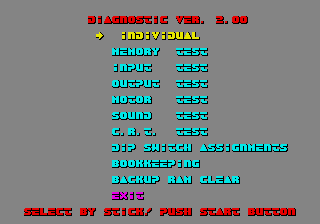 The game contains a diagnostic mode that's fairly similar to an arcade game's operator menu. To access it, you have to enter the Arcade Mode cheat first. Hold down A + C then press Start on Controller 2 at the Sega logo that appears on startup. You'll hear the announcer say "Get ready!" Now, hold down A + B + C then press Start on Controller 1 during the attract mode or at the title screen, and the menu above will appear. Several of these options appear to be for show only, but the Sound Test menu will let you listen to the various jingles that aren't available in the normal sound test, as well as various sound effects.

Present at 0x3BBC0 in the ROM are the hidden messages from the arcade version.