Air Buster: Trouble Specialty Raid Unit is a horizontal shoot-'em-up with colorful graphics. It was later ported to the Genesis and TurboGrafx-16, with a planned Sharp X68000 version scrapped during development. 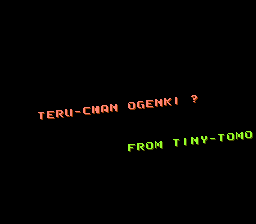 A hidden Easter egg can be activated by placing first place on the high score list, entering TERU as the name, and pressing 1P Button 1 16 times on the high list table during the attract mode. The amount of time the message stays on-screen is shared with the high score list, so the earlier the combination is done, the more time this message will remain before the gameplay demos.

This Japanese message translates to "Teru-chan, how are you?", and refers to a girl that developer Takeuchi "Tiny Tomo" Hisanori was dating at the time. 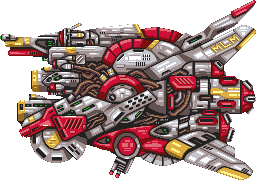 The first stage's boss, City Stalker, only shows the bottom and front portions of its body on-screen, leaving the upper far-right part of its body unseen in the actual game. This is how the rest of it looks, revealing the "MLM" (Mecha Load Master) marking that also appears in the armor of Stage 3's boss, Bit Station. 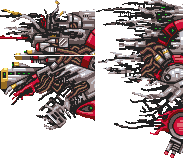 Only two of City Stalker's destroyed parts are used, as seen on the left side, for the top and bottom missile hatches. The sprites on the right, showing the destroyed laser cannons are unused as they cannot be destroyed in the final game.

The second hatch on the right side of City Stalker's bottom area has animations, but it never opens in the actual game. 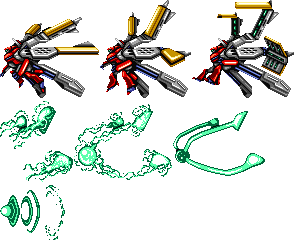 This mecha would've been used as the Stage 5 mid-boss, but instead, a recolored robot from Stage 5 was used. This enemy also had what looks like a green barrier and a projectile attack that would've been emitted from the barrier.

Two animations of the Shell Frame are unused. And three sprites of ring lasers also went unused that the pods would've shot from.

This cyclops-like mecha would've appeared in Stage 4 because it uses the same palette as the blue robot.

Early versions of the game's logo.

The Japanese version is much harder, such as in Stage 4 where the blue robots turn into green robots if you hit them. The missile carriers also appear during the blue robots attack you.