You play Sabotage. I play Airborne.

There are three known releases, each from a different month in 1985.

The game's first edition went on sale at the inaugural Macworld Expo in San Francisco (21-23 February), and finishing it came right down to the wire. The owner resource contains this build date:

However, the application has a mod date of 20 February at 12:35 AM...and the file "air startup song" is dated 21 February at 8:09 AM, less than two hours before the show opened!

The March release is modified 12 March, but retains the same owner resource:

Finally, for maximum confusion, the August application is modified 12 August, but its version string reads:

The left side of the sky was touched up to eliminate repetitive texturing.

The February version launches with a 16-second clip from a symphonic performance of "Ride of the Valkyries". The March revision, which adds Mac 128K compatibility, plays only 8 seconds on those machines and 20 seconds on all others. Text explaining this was added to the online help.

Since digitized audio was the game's killer feature, the March revision adds a credit for RealSound™ and a button that reprises the theme song without having to restart.

Details on wiping the high scores on a one- versus two-drive system were clarified in March.

The August revision changed the application's name from "Airborne!" to "Finder", and moved the title into the icon itself:

A comment was also added to the application's "Get Info" window:

The name change may have ensured that the disk would remain bootable even if it lost track of its startup application, although the circumstances that could cause this are unclear. 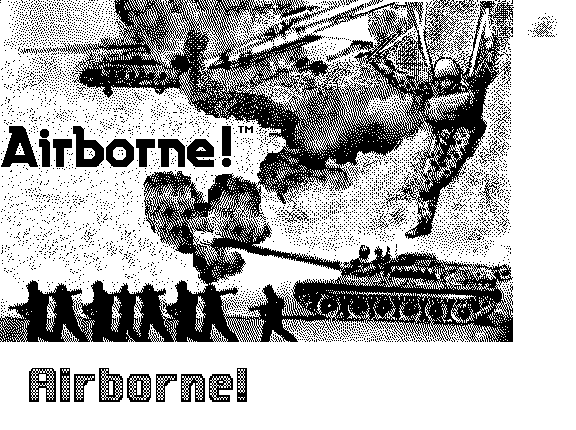 The title screen graphic itself extends by one pixel to the right beyond the actual screen size.

An invisible, zero-byte file provides the game's disk check protection. Unless it is found in the correct location—manually copying it to a new disk will not suffice—Airborne! will refuse to launch.

Its title is an entreaty to would-be pirates:

The file has phony type and creator codes not represented in the disk's DeskTop file. On the August disk, they're ZERO as in "zero bytes", and SBSI as in "Silicon Beach Software, Inc". In March, they were ARGH and KIRK. (No direct image of the February disk survives, only bootlegs modified to omit the file.)