Alvin and the Chipmunks: The Squeakquel (Wii)

A game based on the film of the same name.

You can actually play the game natively on a PC by running a Windows executable named Alvin_PC.exe from the root folder. It was probably used to quickly test things, rather than waste time waiting for a build to completely compile and be deployed on a devkit. According to the PC build's title screen, it is a earlier build from September 18, 2009. 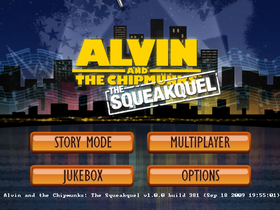 VO\English contains an empty folder named Old Placeholder VO. Judging by its name, it was used to keep track of placeholder soundbytes while the dialogue for all of the characters were being recorded.

Many of the game's lua scripts contain comments left by the developers.