In Amazing Island, you can create your very own monster and make it compete in various minigames. 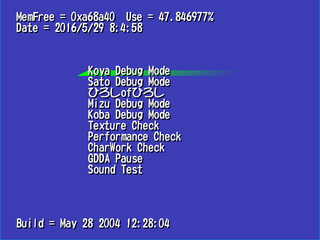 Press L+R+Start at any time to bring up the menu.

Thanks to the debug code and help from third-party tools by CosmoCourtney, you can view three unused Monster Skeletons. They can be loaded in the creator, but due to them missing several important animations the game will freeze or crash after selecting them.

Present in debug mode are a few unused NPCs: a boy, and a reskinned female protagonist model located next to the scoreboard in the data (possibly was going to be a "talk to her for high-score!" but removed). She even has a leftover blue eyebrows texture for her blonde hair.

When using the debugger you can view animations of the "evilings" and all of their unused animations as well as the cut NPCs.

Boy with glasses animations (he has a weird glitch maybe because of the debug view of him but his mouth keeps changing textures each frame):