Animal Crossing is a game in which you, a newly independent person of unspecified age, move into a new town and immediately become forced into labor to pay off the debt you owe to the one person who almost completely controls the local economy.

While this game was the west's introduction to Nintendo's quirky, then-budding life simulator franchise, the game is actually a GameCube port of Doubutsu no Mori for the Nintendo 64, heavily modified in localization to give westerners an experience analogous to what Japanese players got. The localization was apparently so impressive that it got re-localized for Japan with added features, effectively making it a localization of a localization of a port.

The game has a debug mode which can be activated by setting the disc ID version field to 0x99. Use a hex editor to change byte #7 (0x00000007) of the ISO/GCM file. It works on all versions – the North American, European, Japanese (both versions), and Australian games can all be modified in this way.

Alternately, the following Action Replay codes can be used:

Controller 3 features an item select that, if you have the patience to use it, can summon a variety of items directly into your pocket: 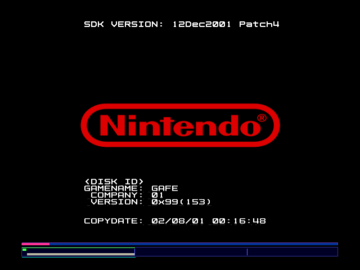 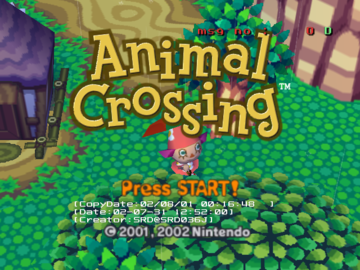 Controller 2 features everything else. Most buttons, when pressed once, will show or hide a debug display. The C-stick is four separate buttons, one for each of Up, Down, Left, and Right. R changes the game speed rather than displaying something on-screen.

In the item screen, C-Down gives you one net, axe, shovel, and fishing rod; C-Left increases your money by 1,000 Bells; and C-Right fills your pocket with bags of 30,000 Bells.

Controller 2 also has two-button combinations, all of which involve holding L, R, or Start. All but one of the possible combinations opens memory editors of some kind (the exception being holding R and pressing Down on the D-Pad, which pauses and unpauses the game). Memory editors can be opened by holding one of the three buttons mentioned earlier, and pressing another button twice. For example, holding L and tilting the C-Stick left twice opens the "S(SREG)" editor. holding L and tilting the C-Stick left again flips to the next page, and so on. The editor closes when there are no more pages or when different button combo starts (e.g., holding R and pressing Start once).

Editors are navigated using the D-Pad to scroll up and down between items, and left and right between possible values. The editor that opens from holding R and pressing Start, "H(HREG)", can be used to activate a debug controller input display by navigating to item 47 and setting its value to nonzero.

When playing NES games, a couple of debug controls will be enabled on the first controller:

The "forest map select" from Doubutsu no Mori still exists and can be activated using one of the following Action Replay codes and pressing the Reset button once at title screen or twice in-game:

In addition to the 15 available NES games, there are four normally unobtainable games dubbed "The Forbidden Four" by fans: Mario Bros., Ice Climber, Super Mario Bros., and The Legend of Zelda. Certain NES game requirements were shifted around in each regional version of the game, which resulted in some obscure methods to obtain them.

These games can only be obtained by hacking them into the player's inventory (particularly for European versions, where none of these were ever made available legitimately), as trying to unlock them with a trade code generator will not work. Interestingly, all except The Legend of Zelda have Advance Play options, and in Doubutsu no Mori e+, the Advance Play data still remains via hacking, even though the games were otherwise erased as console items.

On top of the 19 games that can be played, several more are referenced by the game but do not have ROMs or models in the game's data: Gomoku Narabe Renju, Mahjong, Nazo no Murasamejou, Super Mario Bros. 2, and NES Open Tournament Golf.

The only mentions for most of these games are in static.map, though Gomoku Narabe Renju can also be seen referenced at F4C2C.

An odd unused NPC, formerly fandubbed "Blazel" can be found within the game's code; their name comes from the fact that her design incorporates several elements of that of both Bliss/Caroline and Hazel. However, recent digging within the files of Doubutsu no Mori + has revealed her Japanese name to be Shaki~tsu (シャキッ), meaning "Chestnut"; immediately following this name is the text "とりゃ〜" (Torya〜), which may have been a catch phrase. These two text files are the last ones in the game's code associated with Chestnut, indicating that she may have been removed late into development. What's odd about this character is that she is listed among the special NPCs in the game; fans have speculated that she may have served as a gardener NPC (similarly to Leif in New Leaf), given how stub methods for wilting and growing flowers can be found alongside her in the game's files. Chestnut can be spawned into a player's town using the below Action Replay code, using xxxx as a regular villager, with yyyy being set to either D06C or E15A.

Because her text data is garbled, Chestnut will use various other characters' dialogue, depending on what yyyy is set to. If she is spawned into a player's town with the above code and yyyy set to D06C, her name will be displayed as "[key symbol] ù«–•B¡¡" (the default name for special NPCs) and she will simply parrot one of Kappn's lines. Setting yyyy to E15A, however, makes her appear recycling Jambette's text data (albeit with a male dialogue box instead of Jambette's female one). This appears to be the result of Jambette's status as the earliest-indexed female villager: since Chestnut lacks functional text data, attempting to spawn her in as a standard villager causes the game to loop around and generate Jambette's text data by default. 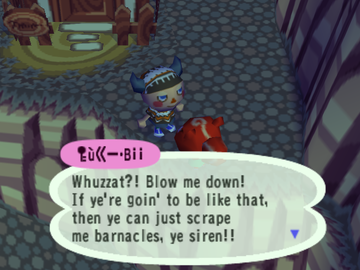 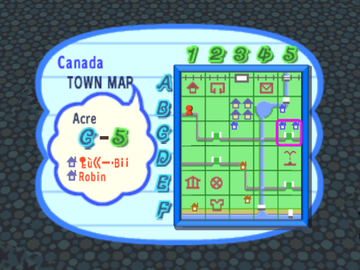 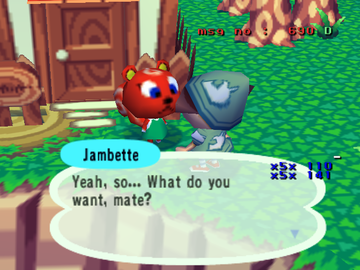 Within the coding of the game lie several unused items that can only be accessed by hacking. These include: 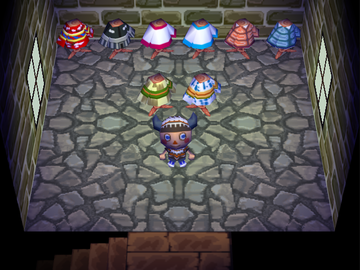 At the beginning of string_data.bin is a test line of text.

At the beginning of mail_data.bin is some testing related text for letters.

Present in the file COPYDATE:

static.str also has the directory from where foresta.rel was compiled:

boot.dol, the game's executable, has a few interesting strings.

At D79E1 is comment that matches a string found in the Game Boy Advance Bootstrap ROM, so it is safe to assume that the .dol contains a copy of the GBA Bootstrap and it is not otherwise part of the game.

The sixth time you meet Resetti, he will force you to copy what he says by typing it in. However, typing in the following phrases will trigger an Easter egg. Some of these things are somewhat vulgar. 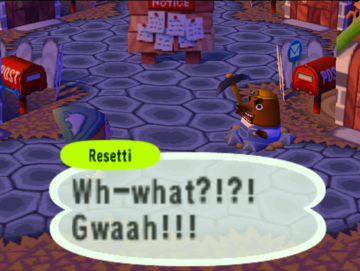 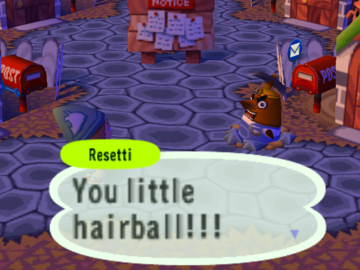 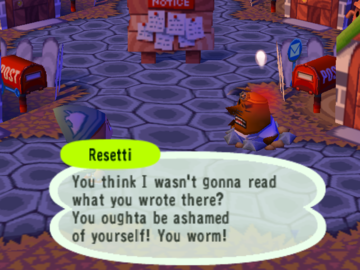 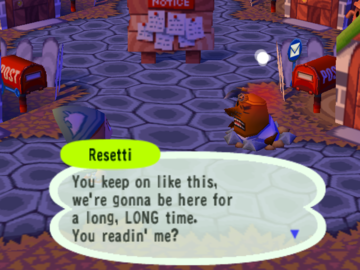