The Game Boy version of Animaniacs (which is a port of the Genesis version) is wacky and fun all around, and one of the few Game Boy games to have a near-complete Super Game Boy soundtrack and in-game overlaying border.

Of course, since it's a port from a console to a handheld, a lot had to go. No Vic Viper here, sadly. 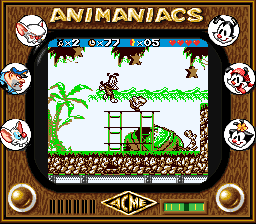 By using the Game Genie code 00A-F6B-F72 to multi-jump it is possible to reach Pinky & The Brain's contraption in Bungle in the Jungle. Physics for the structure are partially implemented as you can only stand on the lower and upper sides by multi-jumping onto them. Don't worry, Pinky & the Brain are both completely harmless and are invincible themselves! Exit by multi-jumping back out.