Arcus is the first game of the same-titled series of RPGs by Wolf Team.

In a world in which humans mastered the art of magic and started using it on each other, a man named Jedah Chaf leaves his home to fulfill his dream of becoming a knight, and to hopefully save his kingdom from imminent destruction.

Found at offset 0xD0 of Disk 1 is a message from programmer Naoyuki Ukeda. Line breaks were added for readability. 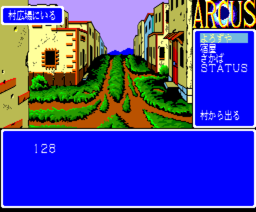 In the first town, press F5 + Select to start a sound test mode. Use Up and Down to switch through the tracks.