Armed and Dangerous is a wacky third-person shooter.

On the Xbox version, enter this code in the cheat menu to enable level warping. 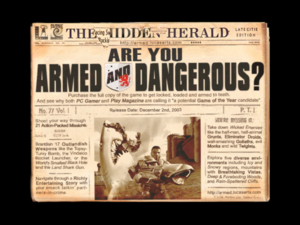 This screen appears only in the demo, when you end the game.

Roman's face texture has facial hair and a mouth that cannot be seen completely in-game due to his mouth being covered by his bandana. As for his eyes, they are separate models.