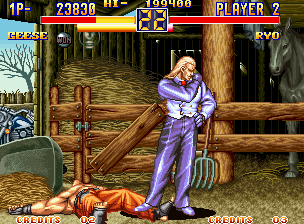 You can play as Geese Howard by changing the value of 0x1092E3 (for Player 1) or 0x1093E3 (for Player 2) in RAM to 0D after selecting a character, in the stage map, or before a round starts. Geese is a mostly complete character, and has very few physical attacks, but makes up for it with incredibly overpowered special moves and high-priority attacks. He doesn't have any pre-fight dialogue or poses, so the game will use the regular Ryo vs. Ryo pre-fight intro, regardless of what characters are chosen at the start, with both characters using an incorrect palette. His palette will also glitch when bouncing off the upper edge of the screen.

Not only does Geese have a completed character portrait, a character name, and an announcer call-out, there are also unused graphics for a second portrait that would've been displayed when he was selected in the character selection screen. He doesn't have a small selection portrait, a defeated portrait, nor any graphics meant to be used in an ending. 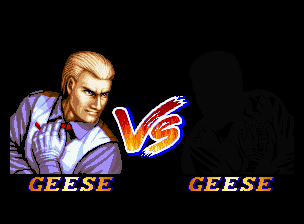 It is possible to have a two player Geese Vs. Geese match by using the cheats listed above. Unfortunately, he only has one usable palette; the default P2 palette is all black, palette 3 has a few purple spots, and palette 4 is... well, red. 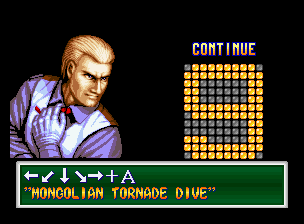 Once you finish a single fight against the CPU, the game will think that you lost and send you to the continue screen. You'll also see one of Temjin's special moves at the bottom for some reason. If you continue, you'll just fight your last opponent again. This situation makes a bit of sense - what happens when Geese wins? It means that the player lost. So the game sends you to the continue screen.

While it is possible to fight against a CPU-controlled Geese through cheats (or by getting to him via legit means), the game will glitch after defeating him, and will either loop the Ryo Vs. Ryo pre-fight intro endlessly instead of showing you Geese's ending, or force you to fight Geese again.

You can also use or fight against two of the four enemy types used in the Strength Training bonus game by setting 0x1092E3 (for Player 1) or 0x1093E3 (for Player 2) in RAM to 0E or 0F before a round starts. 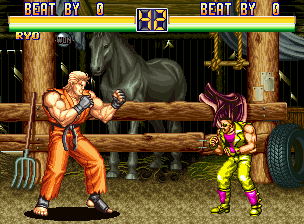 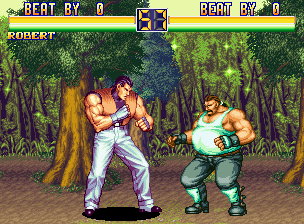 Grunt #1 has a few attacks and can jump, but Grunt #2 has no attacks at all and won't be able to move until the other player hits him. The characters don't have sprite zoom data, so they're always the same size regardless of how far you are from them. They have no proper animations for being knocked down and fall to the ground instantly, and when a player faces them in a versus match, the game will load Ryo's stage for the former and the Spirit Training bonus stage for the latter. It is currently unknown if the other variants of these characters can be loaded as playable characters.

This subtitle was found next to the tiles for the Japanese title screen, and appears to use the same palette.

Note that the palette used in these images may be incorrect, and chosen for clarity.

These images are hidden in the tileset for Geese Howard's stage. These are small versions of the game's characters.

The game was technically released as a "100MEGA SHOCK!" game, but unlike others in the series, it never shows this logo during the attract mode.

These leftover Art of Fighting portraits for Ryuhaku Todoh are buried deep in the game's tilesets. Todoh was the only character from the original game that did not appear in the sequel, so who knows why this was left in. A suitable palette could not be found - this was the closest one available in the game.

The following images are used as padding within the tile sets of specific characters. The graphics appear to use the same palette as the character, including the transparent color.

To use these, your system must have a Debug Bios installed, or your emulator must have the Debug Bios loaded with the game.

Note that some effects listed at the source for this information could not be verified in emulators.