Asura Blade: Sword of Dynasty is a 1998 fighting game developed by Fuuki for arcade systems. It was later followed up by a sequel, Asura Buster.

Within the game exists a partial translation of the game's ending sequence, viewable within MAME's tile viewer starting at 0x3190:

There are a total of 8 unused music tracks in the game, of varying lengths and styles.

Several unused lifebar name graphics can be found within the game's graphics:

"Doppelganger" refers to the "Your Shadow" fight, and is a placeholder for when you lose (as the name displayed for the CPU is changed to allow for "Doppelganger wins"). "Cerberus" refers to an unused bonus stage, while the dragons refer to presumably unused bosses, though only the Gold Dragon remains (see below).

A grim reaper statue with Japanese text written on it, found in the same area as the select screen static sprites. The text is Yashou's name, for some reason.

Unused names that appear in a separate tile group from the regular names. Comparing the order, "Aries" replaces Alice, "Crow" replaces Zam-B, and "Bolt" replaces Talos. While Curfue is listed here, S-Geist and Doppelganger are not.

Unused stage name text. "Beast fight" was possibly for the Cerberus battle, however there is no indication as to what stage Dragon Tail was going to be.

An unused pre-introduction graphic for "Project ZGR", who were not actually credited in the finished game.

Alternate subtitle "Sword of Doom". Judging from its placement next to the title screen graphics, it was the original subtitle for the game.

There are also several tiles that when assembled form a large dragon with its body presumably off-screen, presumably the "Superior Dragon" in the earlier mentioned text. Unfortunately, no modification to the character select code allows the player to battle said dragon in the game or see it in action. Oddly, the sequel features a dummied character named "Dragon", but no accompanying graphics or programming. 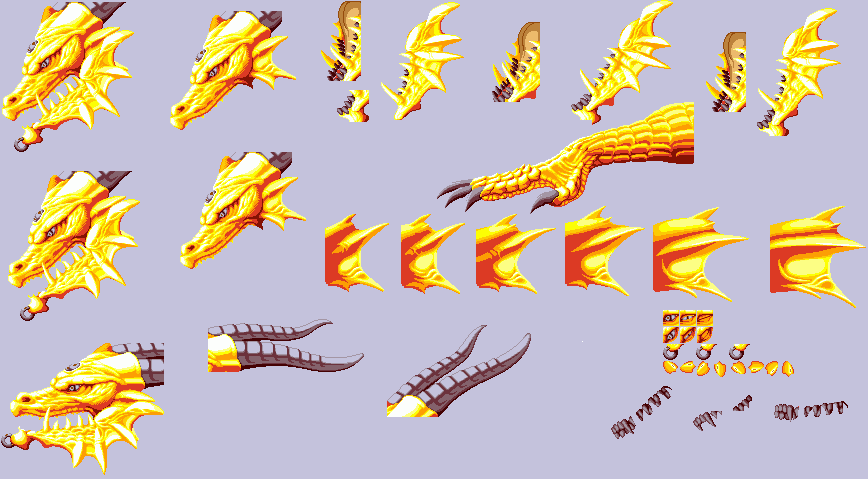 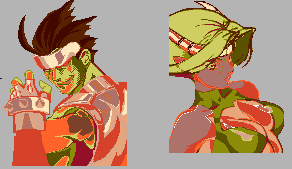 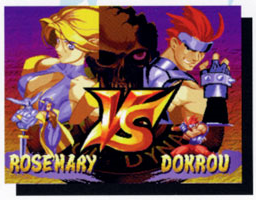 From the arcade flyer.

The game also features two very early large portraits for Yashou and Rose Mary. Though no correct palette exists for them within the game, they can be seen in the second screenshot of the arcade flyer for the game, albeit with Rose Mary sporting a long yellow coat and blonde hair. Yashou in addition was called "Dokrou" at this point.