Bad Piggies is a puzzle video game developed by Rovio Entertainment, and was the company's first spin-off of Angry Birds.

There are 2 placeholder terrain texture images named defaultCurveTexture and defaultFillTexture, which use the same image. They consist of a black and white checkered pattern with text saying "ADD A TERRAIN TEXTURE" on them. 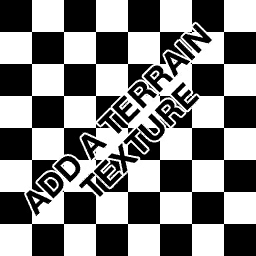 A developer cheat menu is present. The UI click sound isn't played when clicked nor its options are too.

On computer builds, the quote in the background said by King Pig is "HELLO PETER" while having the same texture as the top of the credits page.

On versions past 1.5.1, the quote was changed to "Jolly good day, sir" while also giving King Pig a monocle, sir would be replaced with the name of the hardware. The button layout was updated to be nested in a scrollbox.

The said menu shows various options that can be toggled or simply clicked on to take effect.

On computer builds, you can enable it by:

1. Swapping out level17 for levelX in BadPiggies_Data forces this screen to load over the original screen.

2. Modifying the build settings file in resources.assets to add the cheats_enabled setting and making it true will let a button called Open Cheats to load it appear on the main menu. 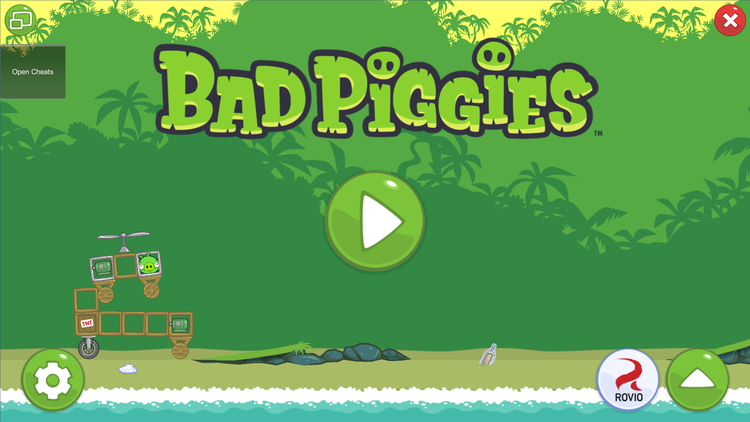 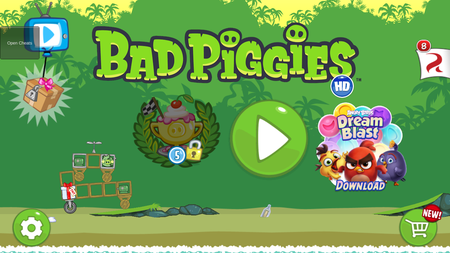 In the bottom-right corner, the application_version and svn_revision values from build configuration is shown in this format below Debug up top (vX.X.X - XXXX), the text isn't scaled for smaller phones so it's not so useful on them. 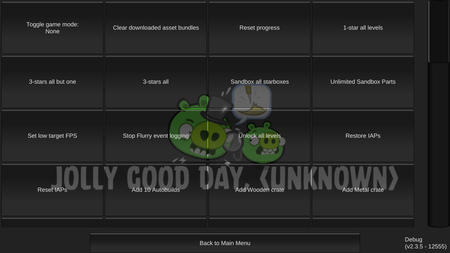 If developer cheats are on, the hidden NEW CHALLENGE button will appear, in the menu, a button called TOGGLE CHEATS is present, touching it shows the levels for the three daily loot crates and shortcuts to the levels, touching the level names also make the game act as you watched an AD to know the level, NEXT LEVEL and NEXT LOOTCRATE are also present, but don't work.

If build settings are modified to make the game act like a cheating build, these pig buttons will appear in levels aside from sandboxes and King Pig feed, in the game's assembly, these are referred as cheat buttons, CheatButton1Star and CheatButton3Star, unfortunately both don't work on later releases.

Instantly moves the pig to the finish and objects it is using, 3-stars the level and also collects skulls.

Instantly moves the pig and objects it is using, damages the contraption and "beats" the level.

These only work if the game is a Unity debug build.

If the game is a Unity debug build or setting forceEnabled to true in the FPSCounter MonoBehaviour, an FPS counter on the bottom left corner is visible, outputs like: ##.##. 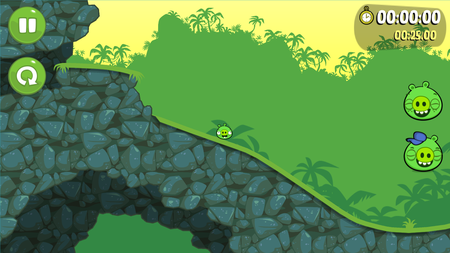 If the game is a development build, the SVN revision number is shown by the version number.

This game has an alternative China version, distributed by TalkWeb, a Chinese mobile game distributor. If China version is enabled in BuildConfiguration, there will be an extra Weibo button in the settings menu. In addition, the movie link is changed to "YoutubeChina", which redirects the browser to Youku, a Chinese equivalent. It seems that the Chinese build uses TalkWeb's IAP instead of Google or App Store; the code, though, is not in the international distribution.

This is mentioning a Python script from internal development in older versions of the game, by the name of the file, it likely builds a game configuration file while leaving this generated and commits it to Jenkins.

MainMenu.cs in the main game's assembly file mentions m_xboxLayout once but unused, there is no other mention in the game's files and other scripts.