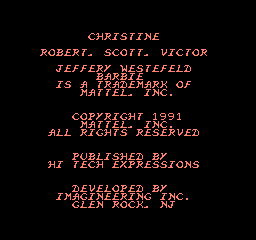 Hold Select, then press Reset. Continue holding Select at the initial copyright screen and quickly press A, B, Up, Down, Left, Right, A, B (this must be entered within the first five seconds the screen is displayed). The names "CHRISTINE, ROBERT, SCOTT, VICTOR, JEFFERY WESTEFELD" will appear at the top of the screen. To return to the normal copyright screen, press A + B.

The same cheat is present in another Imagineering game, The Simpsons: Bart vs. the World.

The last three tracks on the NSF (both revisions) are unused jingles.

In the Revision 0 release the second to last credit cloud reads:

In the Revision 1 version, more composers worked on the game, and so an additional cloud was added:

Interestingly, the new composers seem to have their only credit in this game. The only exception is Bill(y) Pidgeon, who was a producer for Hi-Tech Expressions. Billy said that the three of them only composed music for this one title. Wario's Woods (NES) has an identical difference, where the European version has different music and credits more audio staff.

Some of the music was completely changed between revisions. The European version uses the Revision 1 music.