Batman: Return of the Joker (NES)

Batman: Return of the Joker is a followup to the previous Batman NES game developed by Sunsoft, though this one is based more on the comic books than the movies. It's often considered one of the most graphically impressive games on the NES.

A rather lousy Genesis port was released as Batman: Revenge of the Joker. An SNES port was also developed but went unreleased. 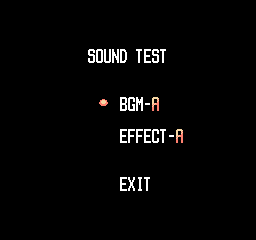 Hold A + Start at the title screen.

Icons of unknown purpose. There doesn't really seem to be any place where they'd fit, either.

The game contains the whole 4kb chunk of the tiles for some unknown level. There is no level data for this kind of stage.

This is found with the Batman light signal graphic used in the intro.

This spiked ball is present among the Stage 3-2 graphics, and resembles the spiked balls in Stage 1-1.

These rock debris are also present with the Stage 3-2 graphics. Huge rock chunks fall from the ceiling and create debris, but don't use these graphics. Instead, the debris uses graphics from the rock chunks.

A variant of the rock chunks seen during the Stage 3 boss, when lasers hit the ground.

Unused (and maybe unfinished) animation for the water in Stage 5-1. In the final version, the water is drawn with another effect.

An unused enemy, probably meant for the flight stages.

Another unused enemy, located in the same bank as the previous one.

An obstacle meant for the flight stages.

For some reason, some tiles in the Password screen background get overwritten with tiles already used in other places. As a result, at least four tiles go unused. The picture on the right is what the screen is supposed to look like.

Track 6 in the NSF file is not present in the sound test. The fact it loops suggests it might have been intended for a stage.

The only Japanese in the entire game, which translates to "Dynamite Batman", is "Return of the Joker" in the US version. The US version also has "LICENSED BY NINTENDO OF AMERICA INC.", with the other text moved up one line.