Bandai released (essentially) a barcode-reader late in the Famicom's life which had the usual array of Bandai anime/manga licenses. And also this, the sole Datach game which wasn't licensed. 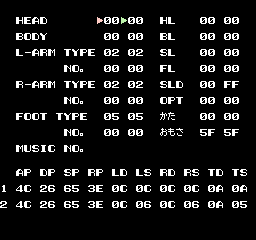 This is, oddly, the only game in the entire Datach series to retain a debug menu. Game Genie LAOXGAPP will let you access it by selecting "FACTORY" from the title menu.

The debug screen includes a sound test, accessed by pressing Select. You can also build your custom Robot and exit back to the title screen. 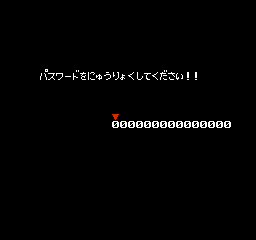 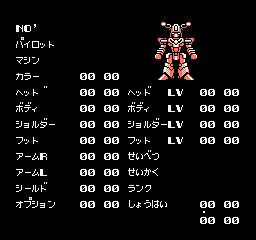 Game Genie code IPOXGAPO will replace the "FACTORY" menu option with one that will take you to this screen. The password needed for this screen contains the complete data set for a robot, including the counters of rounds it won on the different difficulty levels. This password screen is completely unused and is not accessible inside the regular game without hacking. 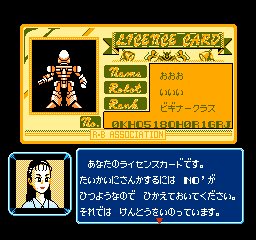 However, there is an secret Easter Egg in this game. If you scan the product code from the official box for this game (4938182860036 or 4938182860050) you'll see a picture above. It contains a 15-digit "secret" NUMBER. This number is what appears to be exactly that password for an unused password screen.

It is possible that at some point this game was planned to be used for some kind of competition, or they just wanted to backup and transfer robots data without using the cart's or Datach device internal EEPROM chips.