Just a Battletoads game (essentially Battletoads 3) with the Double Dragon cast tossed in. And many frustrations removed... 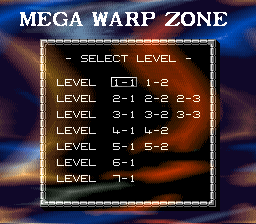 At the character select screen, press Up, Down, Down, Up, X, B, Y, A. The screen will flash to indicate successful entry. Choose your character to be taken to the level select screen. Note that you will get a bad ending upon completing the game if you use this cheat.