Somewhat frustrating platformer about a caveman with a big nose.

All NES games developed by Codemasters are based on the same stub library. As a result, all of these games, including those on multicarts, include a "smiley test" that verifies the integrity of the PRG ROM and CHR RAM chips.

To activate the PRG ROM test, hold Up + Down + Left + Right + A + Select + Start and press Reset. To activate the CHR RAM test, hold Up + Down + Left + Right + B + Select + Start and press Reset. (These tests can also be run simultaneously by holding both A and B, and the results will be ORed together in RAM.) If the PRG ROM checksum matches with the internal value or the CHR RAM chip has no bad cells, the program will display a happy green face; otherwise, it will display a sad red face. The code also attempts to write the test results to an unknown device at $4400, possibly an automated cartridge tester.

Note that the tests cannot be performed with an unmodified controller, as the design of the directional pad prevents more than two directions from being pressed at once.

A flailing person and "Help" balloon intended to appear on the map screen. Apparently Big Nose had to rescue someone at some point.

An animated thing (a bat?) possibly intended to appear on the map screen.

A rectangle that says "START".

Unused 1, 2, and ½ signs. To see the 1 and 2 signs in-game, activate the level select (as described below), then freeze RAM address $318 at 35 to select the nonexistent level 27. The two signs will be visible amongst the garbage in the background.

An animation of the Galoob logo flipping onto the screen, stored with the data for the Codemasters logo. No code to display this animation exists.

Had it been in the game, it would have animated something like this. 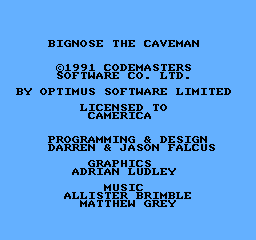 After powering on the game, before the Codemasters logo appears, hold A + B + Select + Start to see a hidden credits screen.

A set of four configuration flags can be found starting at ROM address 0x3C036. Note that Game Genie codes are not yet available for most of these, as the codes modify too many ROM addresses. 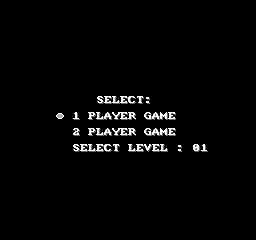 Change ROM address 0x3C036 to 01 to enable a stage select option in the player select menu. Press Select to change the starting level number and Start to play. 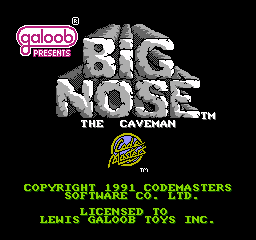 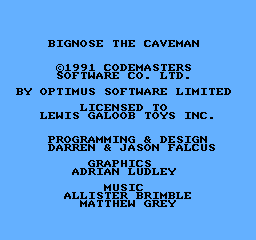