This is a sub-page of Billy Hatcher and the Giant Egg (GameCube).

Demo versions of Billy Hatcher and the Giant Egg were given out in Europe; one means of delivering them was through magazines. While it looks a lot like the final version, there still are a number of differences. Interestingly, the build date for the demo is the same as the final USA and European releases: April 17, 2003. 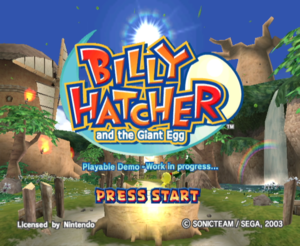 The only difference in this demo's title screen is the "Playable Demo - Work in progress..." text. 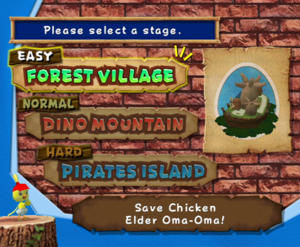 After the title screen is a unique stage select screen with three missions to choose from, ordered by difficulty. All of these missions are in the released version. 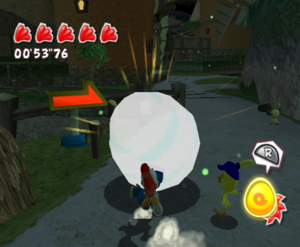 The demo shows a unique R button prompt not present in any other version when an egg is ready to be hatched. It's slightly misleading, since it displays only when holding an egg but hatching eggs requires letting go of them first.

A lot of the differences involve the types of eggs present. There is a much wider variety of eggs available in this level in the demo. This was likely done to show players more eggs in the game, as this level, being the first, effectively serves as the tutorial in the final game.

Oma-Oma's egg is in a different location in the demo, and the other part of the level where it is in the final is inaccessible.

The Courage Emblem's location is different between versions as well.

Three large fruits near the Chicken Suit egg are present in the demo but not the final.

An egg containing Rikol is present here in the demo but not in the final.

The Sonic Team egg in the final is a Fire Comb egg in the demo. Both eggs are in slightly different locations.

The Tiger egg is a Chameleon egg in the demo.

The standard egg here in the final is a Recky egg in the demo.

The Cipher egg here in the final is missing in the demo.

Chick has been kidnapped!

The first enemy spawn consists only of simple enemies in the demo.

The second enemy spawn in the demo has more enemies overall but only one larger enemy.

The pad to unlock the Egg Ring in the demo is simply on the floor. The final has the pad on a wall and an additional Egg Ring to help hit it.

The demo has a large banana and apple here, while the final has four small melons instead.

The demo has text that doesn't appear in the final when you approach Chick. For some reason, it refers to Billy as Bill, which doesn't happen in any other text in any version. This text was likely added since players don't have a chance to use these types of bombs in the other levels in the demo.

Hurry to the Pirate Ship!

The egg containing the Chu Chu Rocket Challenge GBA game in the final is an egg that contains a 1 Up in the demo.