BioShock is a genetically-enhanced shooter which proves to be different from the rest. A sequel came out in 2009, and a third game, BioShock Infinite, released in 2013.

Named EdSplash.bmp, this is found in the Windows version. The Little Sister looks a little different from her final look. The area also doesn't look like it made it into the final. 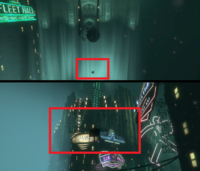 There seems to be a blank sign and four little rectangular prongs floating right under the Bathysphere. It could be used for distance between the ground at the end, or a placeholder for when the Bathysphere was to be completed. It follows you from the start, all the way to the end of the little trip. It has no physics or textures.

Unused Plasmids have been found in the game's files of Bioshock. It includes its use and some unused graphics that goes along with the Plasmid.

A Plasmid that was removed late in development, as it is still referenced in the game's files. The developers explained why they removed the plasmid saying it ruined the game's scripting which resulted in breaks.

Speed Booster was an early Plasmid in development, but ended up scrapped. It acted somewhat the same as the Aero Dash Plasmid from Bioshock 2's Multiplayer. It allowed the player to move at a very fast speed for a short period of time.

Parasitic Healing was a Plasmid that existed very early in development. The Plasmid would be used by shooting an energy bolt at an enemy, causing damage to the enemy and healing the player.

Prototype versions of some, but not all, Plasmids are mixed in with the used videos. They have different music (the same that plays during the trip down in the bathysphere), and unfiltered narration. Some of them also indicate early names for Plasmids. Winter Blast is known as "Cryo Shard" in the video title and "Cryo" in the video itself, "Hypnotize Big Daddy" used to be called "Befriend Big Daddy", and "Target Dummy" was "Decoy" (which it officially became in BioShock 2).

The following changes were made to the German version, so that it could be released with an 18+ USK rating: