BioShock 2 is presented as a survival horror first-person shooter, with the player taking on the role of Subject Delta, a prototype for the Big Daddies eight years after the events of the first game.

There is a Little Sister in Ryan's Amusements that is able to take damage and die. This is the only one of its kind in the game that is able to be killed. It goes into a T-pose after death with full physics, allowing you to hit the model afterwards. 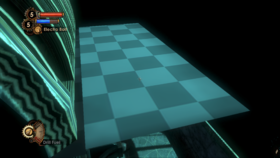 There seems to be a grid like texture on the very top of the ticket lobby. It looks way too clean for any of the textures, probably making it a temporary texture/debug texture.

Unlike all other plasmids bought at Gatherer's Garden, Scout has no level 3 variant. It appears that the only benefit would have been the ability to use more plasmids before you return to your own body. Since Scout 2 also grants more plasmid usage, as well as the ability to hack remotely, the developers may have deemed Scout 3 redundant. Oddly, it's advertised as "New and Improved", whereas Scout 2 is "Now Even Stronger!" -- the reverse of all other plasmids. This suggests that it was actually Scout 2 that was excised and Scout 3 used to replace it, and the videos had their names switched to keep to the naming convention.

An unfinished template for videos that would be played when purchasing tonics. In the final game, only plasmids, not tonics, have videos.

The video shows Sinclair bound to a chair, although not obviously dying. From the low resolution, lack of sound, and the fact that it loops, it was most likely meant to be displayed on a monitor during gameplay, as opposed to a cutscene. Oddly, all the other videos with the "gul" prefix are the cutscenes used for the end of the game. In the final game, Sinclair is transformed into an Alpha Series (which you don't learn of until you see the results) and dies by your hand before the game is over.

There seems to be a lot of Big Sister models outside the map. They are in many poses and have Big Sisters spawned in the model's location. Given that a Big Sister does spawn in the location of the models, they are most likely Big Sister spawners that were not hidden by the developers.

The PC version of the game has leftover graphics from the editor used to create the game. These are located in the SP\Content\System\Logos folder: 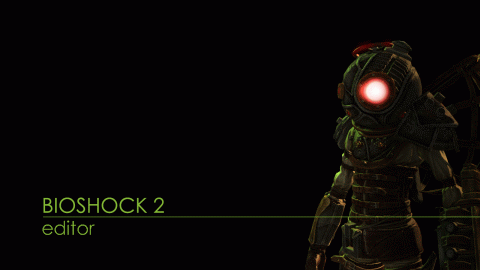