This is a sub-page of Bionic Commando (NES).

The antagonistic force in the Japanese version, whose title translates to "Hitler's Resurrection: Top Secret", are genuine neo-Nazis and have decorated their bases accordingly with swastikas all over the place, starting with the introductory cutscene. These symbols were changed to eagles in the (quite partially) censored English versions of the game. Basically, anywhere you see an eagle in Bionic Commando, it was a swastika in Top Secret (except the continue badges). In a video game context, Nazi symbolism is illegal to display in Germany, and potentially illegal in France and Hungary, which likely would have prevented publication of the uncensored title.

In Top Secret, the first thing seen after turning the power on is the introduction. In Bionic Commando, the title screen displays immediately, playing the introduction after waiting for a bit.

The red lights in Top Secret's communication rooms have an animated palette. The object responsible for this animation (object number 8B) was deleted from the object list in Bionic Commando (which has valid objects only up to 86). 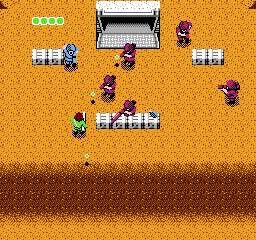 The top-down sequences in Top Secret all have a friendly soldier waiting for you at the end, strafing back and forth in front of the exit. They are ignored by enemies, and will leave through the exit with the player when they are all killed. They are palette swaps of the generic enemy troops; the soldier in the mountains/underground is blue, and the one in grassy areas is green. Touching them inflicts damage. The soldier's object number produces nothing when forced to load in Bionic Commando.

Denazification of the decorations beside the doors. The door itself was also changed, which also applies to every other level where the doors lock. 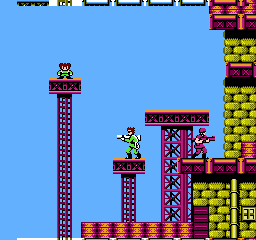 There is a 1-up located above the player starting position in Top Secret that is missing in Bionic Commando. 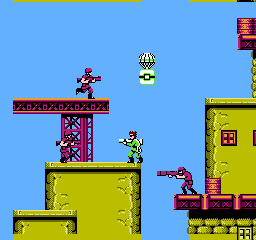 Several enemy soldiers were removed from the exterior in Bionic Commando. Notably, there is an enemy in Top Secret (top-left) who seems to have been deliberately placed so that you'll bounce off his head when swinging on the first light pole over the water. Additionally, the item box that parachutes down on the second island was removed. 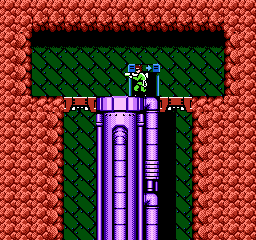 In Top Secret, the left elevator is broken and quickly falls as soon as you step on it. This elevator is absent in Bionic Commando, making the wiretapping hint ("Commander, beware of the elevator") meaningless. Additionally, the behavior of the functioning elevator was changed a bit: when exiting the communication room in Top Secret, the elevator will descend to your level, while in Bionic Commando it resets to its starting position at the top of the shaft. 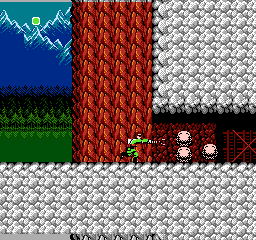 Top Secret features an object that isn't seen in Bionic Commando: a barrier of rocks you must knock down with the bionic arm. Knocking a rock out of the way will destroy it and cause the rocks on top of it to fall down. It deflects your projectiles, but enemies can walk right through it. There are three of these placed in Area 4, and nowhere else: one at the cave entrance, one obstructing the door to the communications room, and the last one in the tunnel guarded by knife and rifle soldiers before the large open room. In Bionic Commando's object list the index for the individual rocks (39) was replaced with a new object (the falling mini-tank robots from Area 10), making the rock barrier impossible to load. 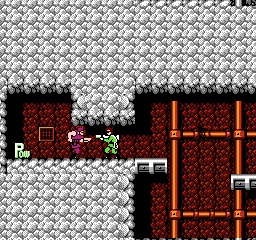 There is a POW item in the chamber at the top-left of the caves that is guarded by a knife-wielding soldier in Top Secret. Both the item and the soldier are absent in Bionic Commando, making the alcove useless. 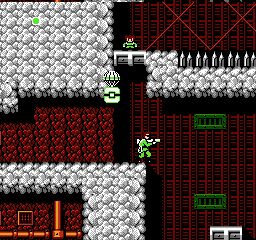 The 1-up hidden across the spiked floor near Top Secret's boss room entrance is also missing in Bionic Commando, making the obstacle pointless. The parachuting item box nearby is also missing. 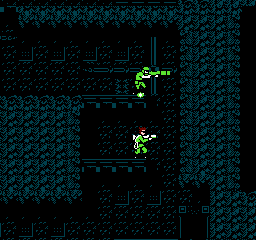 A glitch involving the flare bombs curiously applies only to Bionic Commando. Making your way through the cave without lighting the flare, then doing so while standing directly beneath an enemy so the flare projectile hits them will instantly restart the stage and cost the player a life.

The NPC inside one of the buildings was replaced. The Japanese version uses a generic hostile enemy soldier (one of the "Get the heck out of here, you nerd!" guys) instead of a generic neutral character.

The parachuting item box was moved from the far side of the second quicksand pit in Top Secret to the island between the quicksand pits in Bionic Commando. 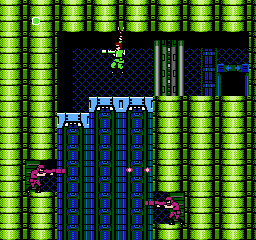 Top Secret has many useless elevators in the interior section of the stage, most of them trapped. The number of rifle soldiers was reduced, relieving some slow down. 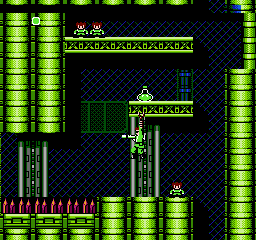 This hard-to-reach area held a total of three 1-ups and a health refill in Top Secret, all of which were removed.

Exclusive to Top Secret is a shooting star that flies over the area with a large stack of purple barrels. The object responsible for its appearance (object 89) is not included in Bionic Commando's object list. 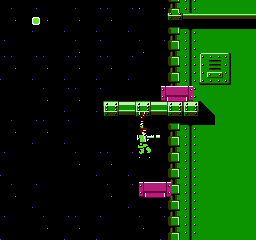 Also exclusive to Top Secret are several moving platforms in the second part of the stage. Their removal makes the series of tricky swings over the pit more dangerous. 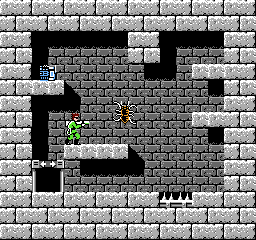 In the first room, there is a spider present, but only in Top Secret.

The contents of the second room are completely different. In Top Secret, there is a non-hostile enemy commander who offers to tell the player the location of the helmet. Bionic Commando replaces him with a room full of bullets. This soldier and part of his dialogue exist unused in the English ROMs.

An item box was added to the vertical room with banners (which were also denazified) and bronze spikes.

Interrogation of the captured enemy soldier who tells you about the secret underground passages is different between versions: in Top Secret, the player must hit him with the bionic arm five times to get him to talk. You can also shoot him, which prompts a response from the nearby friendly soldier. In Bionic Commando he talks when you swing to his side of the room, cannot be killed, and the friendly soldier is not present, but exists unused in the ROM. Additional unused dialogue for both of these NPCs was translated.

The Japanese version also has an obscure secret hidden in the interrogation. Address 7976 counts the number of hits dealt to the prisoner. Hitting him 255 times displays the following message and grants you all the weapons in the game: 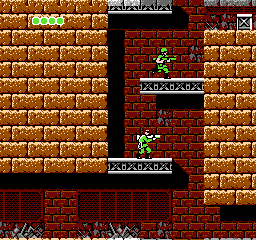 A parachuting item box in the middle of the mine cart room and the spikes hanging over the tracks were removed. 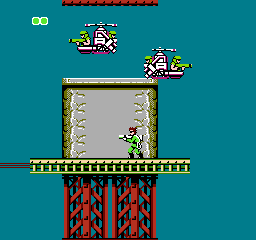 Top Secret has a hidden communication room with no door at the top of one of the towers. Selecting communicate contacts a mustachioed enemy soldier named Terukun (a name mentioned in the credits as a character designer), while wiretapping features an ally soldier named Sambo (presumably also a developer nickname), giving the player the following hints:

Grappling the wall on the right side of the room five times plays the 1-up sound effect and sets variable 1D6B in memory, which gives the player a POW every time both A and B are pressed. While the room still exists in Bionic Commando's data, its entrance was removed, as were the hints (the strings were not translated, and attempting to use the communicator will instantly end transmission). The object responsible for activating the cheat (6F in Top Secret) was both removed from the room and repurposed as the trigger for the self-destruct sequence countdown timer; setting the address equivalent to 1D6B in Bionic Commando does not enable the cheat.

Top Secret had land mines under the swing-path to the boss room door. Land mines remain unused in Bionic Commando.

In Top Secret, the room behind the barriers contains one of the spiders from area 3. This was removed in Bionic Commando, and a moving platform was added. 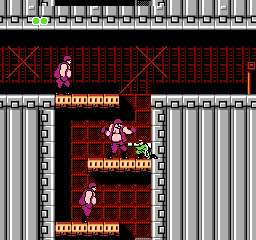 Two Construction Soldiers were removed from the platforms outside the communication room, and one more from the fire pit near the boss room entrance. As a consequence, only two of these enemies exist in Bionic Commando.

A Heavy Object Throwing Soldier in the second room with electrified floors was replaced by a rolling ball in Bionic Commando, making it much easier to traverse the room from the bottom up. 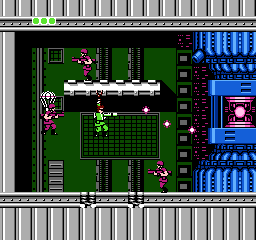 Paratroopers were added to the second generator room.