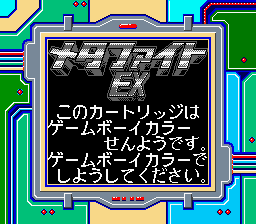 The Japanese version of the game was released on the Game Boy Color, and will show an error message if played on a previous model. It translates to exactly what one would expect it to say. This screen still exists in the Game Boy-compatible US and European versions, and can be activated with the Game Genie code 0A2-0FF-E6E. The screen will disappear after two seconds.

Making the Japanese version Game Boy Color-only appears to have been a very late decision, as the game can be played on all Game Boy types by entering the Game Genie code 011-FDF-C42.

Present in both versions is a list of palette commands and settings. The internal unused palette commands are located at 0xDC25F, while the entire Japanese command listing is located between 0xDC0C0 and 0xDC1FF. The Japanese version has Super Game Boy support, but the addressing was changed making it inaccessible.

The Japanese version contains all of the Super Game Boy features that are in the international version.