Blood Bros. is a spiritual sequel to Cabal with a wacky Wild West theme. Unlike Cabal, Blood Bros. was never ported to home consoles or computers. 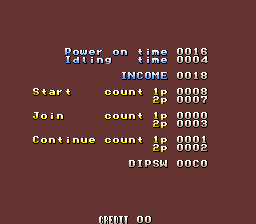 There's an audit screen in the game that's supposed to be accessed by holding a certain combination of buttons while the high score screen fades; this was presumably used in location tests to gauge the game's popularity. In all known versions of the game, there's a branch at the start of the subroutine that skips past the check, rendering this screen inaccessible. To fix this, place the following cheat in the appropriate MAME XML cheat file and hold 1P Button 1 + 1P Button 2 + 1P Up + 1P Right while the high score screen is fading out: 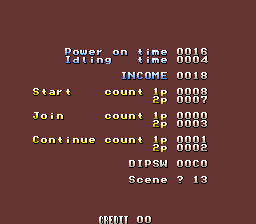 There's an additional feature on this screen that probably necessitated the whole screen being dummied out: Hold any direction on 1P Joystick and press 1P Button 1 / 1P Button 2 to bring up a "Scene?" option. Keep holding the joystick and use Button 1 or Button 2 to change what stage the game starts on. 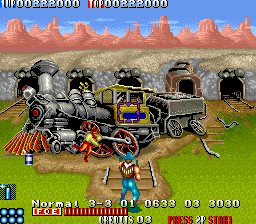 There's code in the game to display debug information for the game's variable difficulty system, but the code is orphaned in the final game. Place the following cheat in the appropriate MAME XML cheat file and enable it to replace the 1P Bomb Count text with the debug display: 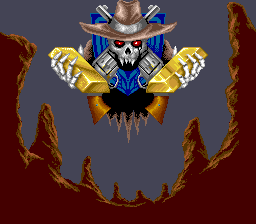 The wolf's head and claws on the final title screen are actually sprite overlays masking the original title screen, a skull logo mimicking the one from Cabal. Interestingly, a somewhat similar-looking skull appears on the Japanese arcade flyer.

The background and object graphics ROMs have these helpful labels at the top of their banks.

A multitude of unused directional arrows, including turning arrows, are in the object graphics ROM.

A "GAME OVER" graphic stored in the font graphics ROM. Never displayed - instead, the game always displays "INSERT COIN(S)" in an inactive player's slot.

An entirely unused 16x16 font set! Cabal had a similar font for use in its high score entry screen, where the player had to shoot characters to enter their name; a similar screen seems to have been planned for Blood Bros. before being dropped.

A mysterious unused power-up. Judging by the bomb on the box, it might have given the player multiple sticks of dynamite.

Two guys in sombrero carrying a shiny box. This is presumably the treasure of Dodge City that Big Bad John stole, as mentioned in the game's ending.

Traditional shooting gallery targets, perhaps too traditional for a game like this.

Four unused enemy projectiles. The missile would probably be dropped by the blimp, while the ax and arrows would probably be used by the Native American enemies. Similar flaming arrows are used in the game, but they're fired from the background straight forward. The last is an alternate version of the bombs that enemies throw in the final game, just with fewer frames.

This small barrel comes in both idle and rolling flavors. Sold separately.

Flower in a pot
Obliterated by man
How fragile life is

It's a gallows...with a little box to stand on. What fun!

The metal doors in Stage 2-1 have damaged graphics, but in the final game, they're impervious to damage.

A leaping fish appears in Stage 2-3 as a source of power-ups, but that jumps from right to left. This fish looks like it would either be an enemy or an unorthodox projectile.

Just a little red-eyed crow. Stage 2-4 has the only palette that fits, so it was probably meant to be roost somewhere in there.

A piano, table, and lantern, objects that would only make sense in Stage 3-1's saloon setting..

This spinning coin is right next to the previous sprites in the object graphics ROM, so it's probably related to Stage 3-1. Not sure how, though. Maybe shooting a cash register or something would spray these out?

There are two small fort graphics for the back of Stage 5-2. This one isn't used.

Stage 5-4's icon has a number of elements that are missing from the stage in the final game, which is conspicuously empty.

The first is this machine tower. Note that for whatever reason, the palette for this stage gives the normally red-brownish wood shades of green.

Wooden walls that would have appeared behind the machine...

...and wooden beams that would have appeared in the upper-right corner of the stage.

Finally, this Off Limit sign would have appeared at the bottom-left corner, below the green tower.

Three sprites for the ending are unused. The first is this campfire, which would have appeared on the first screen when our two heroes make their way out of the cave...

...this tumbleweed would have been used during the horse riding sequence...

...and this bird would have appeared in the sky as they ride their way off into the sunset.

The following string can be found in the audio CPU at 0x012DD: