The colorful mutated household appliances decide to have a fair in the backyard, creatively titled The Big Backyard Fair, with games that are all oddly associated with math. Blue, everyone's favorite reality-warping dog, enlists the player's help to earn money named after herself (that egotist!) in the various games to get a prize while Steve stands in front of a sign.

Like its sister game, it's designed to teach young children basic skills: in this case, math and counting.

Unsurprisingly, this game (like almost every other Humongous game) has inaccessible subtitles. They can be turned on using ScummVM or by adding

to hegames.ini. However, they seem to be disabled on the cutscenes with Steve.

Adding SputmDebug=95710 to the hegames.ini configuration file enables a few keyboard shortcuts allowing control over various aspects of the game. 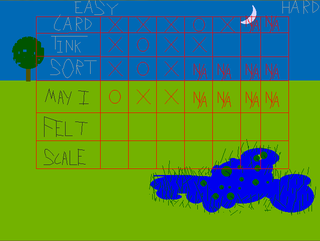 Going to room 13 using debug mode (or the command room 13 into ScummVM's debugger) brings up this crude-looking screen designed to change the difficulty. The "O"s indicate the current difficulty level for that game, while clicking an "X" will adjust the difficulty. Blank spaces and "N/A"s cannot be clicked.