A game based on the popular kids show Blue's Clues. The world is stuck in an infinite time loop, making every day Blue's birthday. The cruel mistress forces you to assist her unwitting accomplice in a game that will unlock the answer to the riddle of what is being served at the later party, what activities will occur, what other game will be played, and what the captive attendees will get as thanks for coming. It's so huge, it takes two discs to cover.

Please note that each disc shares the same resources (minus the assets for disc-specific rooms), so anything used only on one disc goes unused on the other.

Yet again, like most Humongous Entertainment games, this game features subtitles, but with no way to turn them on. They can be enabled through ScummVM's debugger or by adding the line

to the game's entry in hegames.ini or scummvm.ini. However, they are disabled in any FMV cutscenes. In the sign-in screen, the subtitles will be the same color as the player's set favorite color.

to hegames.ini or scummvm.ini will enable an unused clickpoint. It can be accessed by clicking the lamp in the toy room. It involves a light bulb doing silly things. 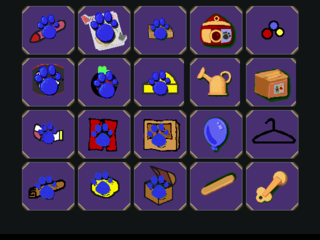 Graphics for an item debug like the ones in most Humongous games remain hidden in the game... but how to access the screen is a mystery. On the Yellow disc they're stored in room 40 and on the Red disc they're stored in room 37, but those rooms respectively contain the Flower Picking and Find My Friend minigames, which are on the other respective disc. It's also worth noting that most of the items here use different graphics than in the final game.

Storyboard for the game's intro, where Steve greets the player... 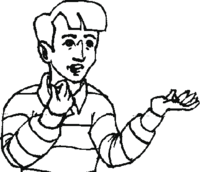 Storyboard of Steve either calling for Blue or (judging from his hand motions) pointing out a skidoo location.

Storyboard of the "How to Play Blue's Clues" song.

Rough animation of the balloons from the "What Does Blue Want to Do?" path.

Another storyboard of Steve talking.

A storyboard of Steve presumably at the Thinking Chair. The clues here are a reference to the very first episode of Blue's Clues, "Snack Time".

This room has a TON of storyboards of Steve. 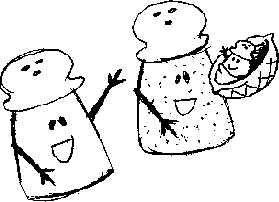 A sketch of Mr. Salt and Mrs. Pepper.

A storyboard of Steve looking very excited about something.

A very tiny storyboard of Mr. Salt and Mrs. Pepper making the cake. The bowl with a face is presumably Bowl from the bakery. While Spatula would appear in Blue's Treasure Hunt, Bowl would not. 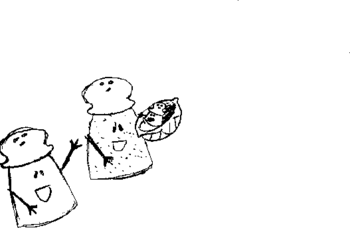 Another sketch of Mr. Salt and Mrs. Pepper similar to the first, except Paprika's mouth is open and there's a large amount of blank space. 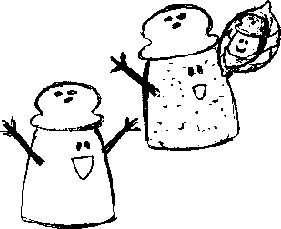 Another storyboard of Steve talking. Seeing a pattern?

A sketch of Steve just standing there. 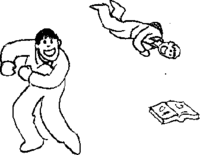 A sketch of Steve skidooing into Storybook Land. 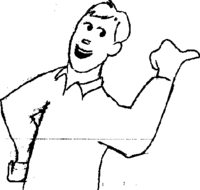 A sketch of Steve pointing something out.

A sketch of the camera.

A storyboard of Steve gesturing towards something. 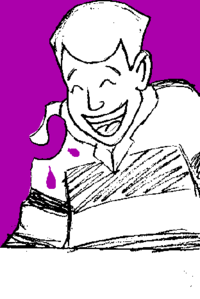 A sketch of Steve being licked by Blue, but for some reason she's not actually drawn in. The background has been preserved so the transparent "spit drops" can be better seen. 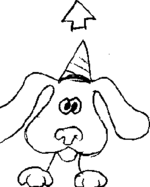 A storyboard sketch of Blue popping her head in.

A storyboard of the "So Long Song".

A storyboard of Mr. Salt and Mrs. Pepper bringing in Blue's cake.

A storyboard of Steve giving the player their certificate.

A rough animation of the certificate.

A sketch of Blue skidooing. 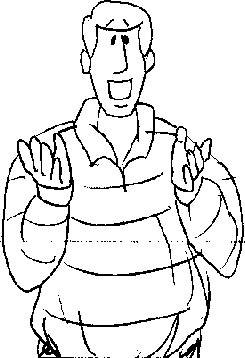 Another sketch of Steve talking.

A sketch of Steve skidooing, presumably into the picture of the Present Store or the Farm, judging from the positioning. 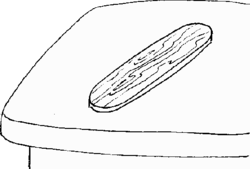 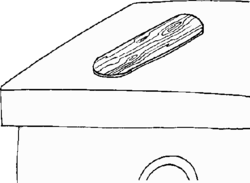 Sketches of the juice pop stick lying on the counter.

Yet another storyboard of Steve talking. Thankfully, it's the last one.

Lots of crude placeholders for the instruments, some of which have been done in MS Paint. These animations are mock-ups and close approximations as to how they would look.

Also included are a bunch of stray "noise lines" meant to go with the instruments. They're entirely uninteresting, but hey, they're unused.

Placeholder icon for a striped balloon, meant for the item debug. The ripped graphic only uses the icon for the plain balloon, and the final game uses a spotted balloon instead.

Icons for the square and triangle keys, also meant for the item debug. The ripped graphic only includes the icon for the round one.

A red X, likely meant to go over currently selected items in the item debug. For whatever reason, it's duplicated multiple times.

Rooms 16 and 19 have hidden textures that are obscured by the inventory bar. They can be viewed by opening the ScummVM debugger (Ctrl+D) while in a room without the inventory bar and entering the commands "room 16" or "room 19".

The disembodied child voices have a lot of lines that go unused, most of them seeming to pertain to hovering over objects in the inventory bar. In the final game, kids only say the names of non-permanent items when clicked, and then only in rooms when they don't need to be used.

It's the Spy Fox sting! It is used in the demo when clicking on the greeting card clickpoint where the Spy Fox cameo randomly appears, but the cameo was removed in the final thus made this sound left over.

An instrumental of the "Pin the Flag on Mailbox" song. Presumably meant to play when talking to Mailbox on the "What Does Blue Want to Do?" path or at the party at the end, where he sings it, but it doesn't.