The buggy yet decent action RPG entry in the Blue Dragon series. 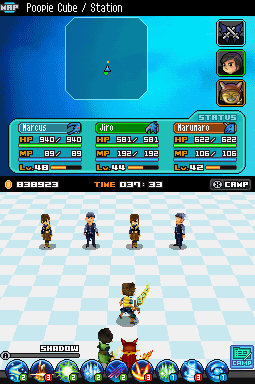 Note: The area name in the screenshot is not that of the debug room, but rather that of the zone it got swapped with.

There is a debug map under the name zzz. It can be accessed via file swapping. It consists of a large checkered square with four NPCs in the middle.

From left to right, the NPCs are:

Apply this patch to the US version, then visit any Forest Arena through the portal found in the center of the city.