Bomberman Collection offers three explosive titles for the price of one. Released only in Japan as both a monochrome and yellow cartridge packaged in special collector's tin. 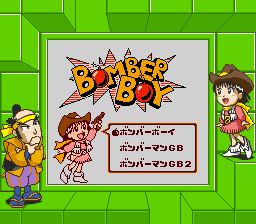 There is an unused routine which loads a border for the game select menu. However, the first border is referenced effectively causing the game to disregard the routine altogether. Game Genie code D50-77E-C40 will load the unused border, which was actually later in Hudson's other Super Game Boy title Same Game, which was released in 1997.

An unfinished routine exists which was intended to load either selected border by setting the ID using RAM address C006 and either border ID of 01 (Bomberman Collection) 02 (unused border) or to 00 to nullify loading a border. Instead, the code will only keep the border when transitioning to the next, for whichever border ID is set. This function either did not work out the way it was intended and they didn't have time to finish or there was no need to complete the code.