Bounty Bob Strikes Back! is the sequel to Miner 2049er.

On the Game Adjustment screen (accessed by pressing Option on the title screen), there is an section labeled "Special Codes". Entering specific numbers and pressing Option again will result in messages appearing. 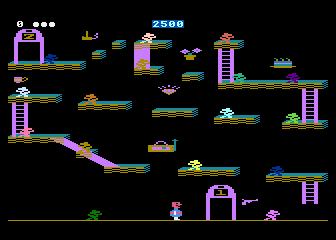 In addition to displaying its message, the 100 code will remove the hat from Bounty Bob's in-game sprite.

Setting the special code to 61,800 and pressing F + Option will activate a set of debug keys while in-game.

In addition, specific levels can be visited by typing their corresponding number with the number keys.