Brain Lord is a short-but-fun action RPG with heavy emphasis on puzzle solving. 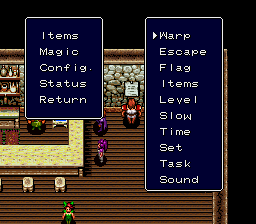 Use Pro Action Replay (PAR) code 7E01B856, open the regular menu, and press Select. The menu itself is somewhat difficult to use, however. 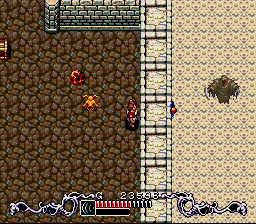 The single unused enemy in the game. It will disappear and reappear at intervals, placing itself at different spaces around you. When appeared, it will disappear/reappear every frame to simulate a "transparent" effect. When it gets close to you it will slash at you, dealing a great bit of damage.

The "Stop" spell works wonderfully on this monster. In the final game, Stop is praised a lot but doesn't actually get much use. It's possible that Stop was supposed to help defeat these monsters in the game.

However, there's a pretty large issue with this monster: it will freeze the game seemingly at random if it's within range of its AI being activated. That aside, it seems fully functional.

There are a few unused rooms in the game. While unused, they typically still contain objects for use.

Map 50 is a room in the Tower of Light. It isn't accessed anywhere in the ROM aside from the debug warp gate pointer. You can get into this room by using the debug enabling code above and using the warp to go to map 50. The tile on the right teleports you to the hallway between the room with the "bouncing" steel ball, and the room with the merchant.

Map 179 is in the Abell Ruins. It looks very similar to a room you can drop into which gives you a Heart and a Warpgate. This room, however, has a Drop of Protect in the left chest and a Warpgate in the right. The stairs take you where the other room would - the first big room with the disappearing blue floors.

Not all the rooms in the game are accessible through the debug warp function, as it has its own pointer list.

There are a number of unused items and pieces of armor, including a few powerful debug tools.

A song that can only be heard via the debug menu, by playing track 26 in the sound test. It's an upbeat, peppy tune that could have worked well for the game's "attract mode" (which is oddly silent) or as an alternate credits theme (as the one that is used is surprisingly somber).

This orb-like object is loaded into VRAM whenever a Warp Gate item (or the Dragon Scale) appears on-screen. What purpose it would have served is unknown; it may have been intended to be a field icon for Barrier Capsules/Speed Capsules, which are never dropped by enemies or hidden in jars. The palette is guessed. 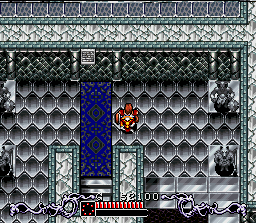 Normally, each dungeon has four save points which, once activated, can be warped back to immediately via a Warp Gate. However, not only does the Platinum Shrine only have three such save/warp points, it awkwardly skips the second one on the warp menu. You can warp there with the Debug Warp Gate, but it merely leads to a nondescript area not far from the first save point.

For some reason, the US version changed the main character's hair from blue to brown.