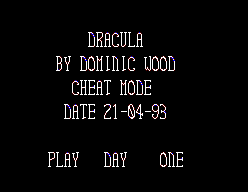 Press and hold down II as soon as you power up the system. When the music starts playing, press Up, Down, Left, Right, Left, Right, Down, Up. Start a new game and a Cheat Mode screen will appear. You can choose what stage to start on, and if you press II, you'll be granted invincibility. You can still die if the time runs out, however. The screen also shows the game's build date and the name of the programmer, Dominic Wood.

Note that the invulnerability cheat does not work in the traditional sense: rather than disable damage, it turns off hit detection on Harker so enemies simply pass through him. This has the undesirable side effect of also causing items to do so as well, so you cannot collect any coins, diamonds, 1UPs, or special weapons, the last of which renders the game unwinnable as Harker's default knife cannot hurt bosses.