Breath of Fire II is the second game in the Breath of Fire series, as the name suggests. Features an excellent plot for its day, and also a translation legendary for its sheer awfulness. And hilarity.

Two very full-featured debug modes exist! One is a menu and the other is activated in-game. 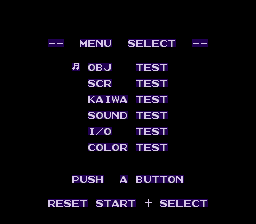 Use the Game Genie code E7FB-870F DDFB-876F 36FB-87AF to enable the debug menu. To access it, just reset the game. Up and Down selects an option, and A chooses it. Despite what it says, though, pressing Start + Select will not reset the game.

In all menus, Pressing L + R will bring you back to the main menu.

OBJ TEST - You can view every sprite in the game with this, even more than one at the same time. Nice!

SCR TEST - A map test! You can move around any map in the game. There is also debug information in the form of a map ID and X/Y coordinates.

KAIWA TEST - A dialogue box test! You can view every bit of dialogue in the game, obviously.

SOUND TEST - Just what it says. Tests the music and sound effects in the game.

I/O TEST - Controller test! Press a button and it will show up as "ON" if it is pressed (or working).

COLOR TEST - Shows the color bar palette. The only thing you can do here is press L + R to exit. However, it's useful for adjusting your screen's colors.

Game Genie codes 64FB-8D04 3CFB-8D64 activates the in-game debugging features. During the game, the second controller can be used to access various debugging functions and interact with their corresponding menus. Player 1's controls will work as normal unless a menu appears, in which case Controller 1 will not work. Pressing Start will exit you out of a menu in every instance. Once you leave a menu, you can't access any of the menus again until you leave the current room or access the standard camp menu by pressing X on Controller 1. Press a button to activate the following: 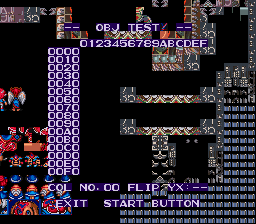 A: CHR Viewer. There are three different ones to choose from, which comes up in a menu: 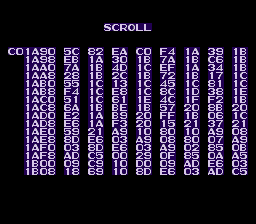 B: Memory viewer AND editor! Wowza! Be careful, as you can easily freeze the game or worse if you don't know what you're doing. 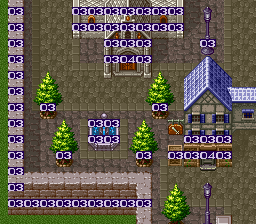 Y: Enables a method of toggling graphic layers and viewing the collision detection. However, when you move around, the numbers will follow you, rendering it useless unless you stand in one spot. Press different buttons to play with the following: 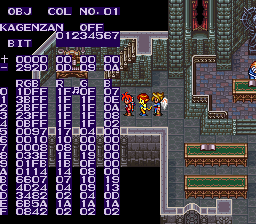 X: Color Mode. This allows for the color editing of many things on the screen. Any changes you make will be reset once you switch rooms. 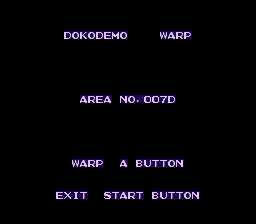 L: "Dokodemo Warp"! It's like the Dr.Warp item in Breath of Fire except in a convenient menu form. 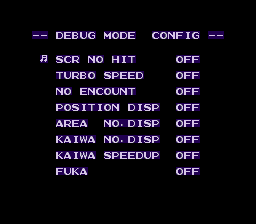 Select: Activates the unused Dragon Quest test jingle and saves the game on the spot you're standing.

Start: Does nothing, but nullifies your ability to call upon a menu until the next screen switch.

The Manillo shopkeepers were apparently intended to use the same little "blowing you a kiss" animation as in the first game, but it was left out for whatever reason.

A large pot that never actually appears in the game. Unlike similar graphics, this is stored as a sprite, not a background tile.

It's... a barrel. There were places this could have been used. It just never actually was.

This fist graphic isn't actually unused, but its palette is. At the very beginning of the game, answer 'No' to Father Ganer's request, and he'll hit you with it. However, as the intro is in monochrome, and this graphic never appears anywhere else in the game, its actual colors are never seen.

Baskets of fruit can be found as decorative tiles here and there in houses around the game world, but sprites of just the fruit can also be found in the ROM, with slight differences in appearance and palette. In Breath of Fire, it was possible to eat baskets of fruit for small HP restoration, and it seems the same was planned for the sequel, but dropped for whatever reason. 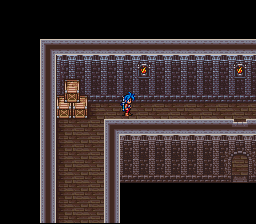 There is no reason in the story to enter the Coliseum's arena through Katt's entrance, and you never do; the area is actually used in Katt's intro/bio sequence. However, the area has full entrance data and collision. 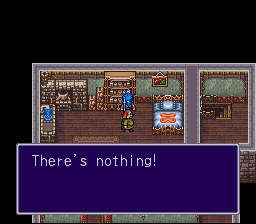 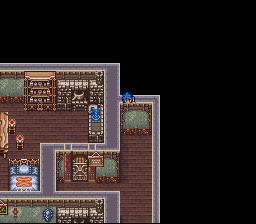 In HomeTown, there are two apartment buildings. The right one houses Ryu and Bow's apartment and has two floors. The left only has a single floor. However, a second floor still exists in the game's coding. Use the Pro Action Replay (PAR) code 7E503094 to access it. There are no NPCs here, but there is a searchable cabinet that has nothing, and a staircase back down to the first floor which places you in a wall where the stairs would have been. 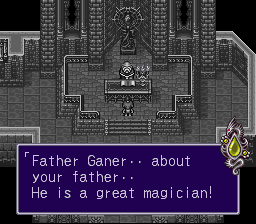 It seems that there is an older version of the church Ryu grew up in that resembles all the other generic churches in the game. Use Pro Action Replay (PAR) code 7E503075 to visit it. If you visit it in a new game, the priest will say a line used by someone else in the town, and if you visit it after the opening, he will act identical to the priest used in the final version of the map. 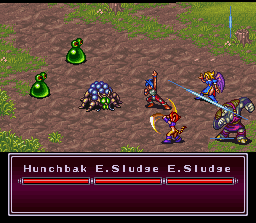 There are a few skills hidden away in the game's code, with varying levels of effectiveness. All of the unused skills cost 0 AP, and have the generic description "Use this during the fight." 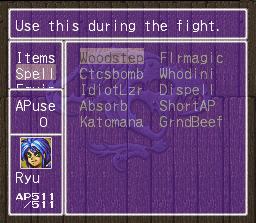 These skills differ from the ones above in that they are actually used, but their names aren't. Instead of the name being displayed, usually a line of dialogue by the user is shown.

There are four unused monsters hidden in the game's code: C.Kameo, Headhutr, KARI, and Chairman. C.Kameo and Headhutr can technically be encountered inside the Grand Church, but only in rooms where random battles do not happen without cheat codes.

Altering $C55AF2 (HiROM) or x055AF2 (PC address) to 03 FC will cause enemies to spawn in the Grand Church entrance with the locked gate and pressure plate on the floor, complete with the proper battle background. You'll be able to properly encounter C.Kameo and Headhutr with these values.

KARI and Chairman do not appear in any enemy group whatsoever. Both are likely placeholders: KARI translates to "temporary", and Chairman shares the same stats as KARI, meaning that this was likely a placeholder enemy as well. Forcing the game to load either of them will cause incorrect graphics to be loaded.

An unused variation of the iconic Dragon Warrior/Dragon Quest inn jingle can be found mixed in with the sound effects. Particularly odd, as neither Enix nor Dragon series composer Koichi Sugiyama had any known involvement in the production of Breath of Fire II. Possibly used to test the sound engine. 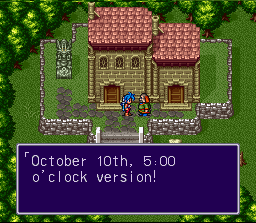 A strange message can be seen if you return to TownShip and speak with Bow after attempting to have Ryu fuse with Sana, but before you talk to the person in Capitan who would send you back there automatically (note said NPC in Capitan is provided because it is normally impossible to return to TownShip otherwise):

It's normally impossible to see this bit of text (due to the fact that you cannot pass Windia without Sten or Jean and your respawn point gets forced to Capitan), but it can be done via hacking. The same text can be viewed from otherwise inaccessible coliseum NPCs and Rand using SCR NO HIT at Coursair. It is default text data of sorts, pulled because the game wasn't specifically told what to display here. Presumably, this refers to the game's current build status, albeit mangled, like most of the rest of this game's text. 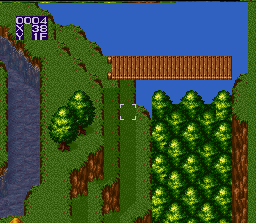 Just east of the mountain Windia Castle sits on is a small, unfinished bridge, which can't normally be seen. A similar bridge was, however, used in Winlan on the original game (it's the same town; the name was merely translated differently), where it's accessible normally and leads to the lands east of the town. It seems there were plans to re-use this concept, but entering Windia from the eastern bridge on the overworld simply takes you directly to an underground catacomb map.

Bleu is unique in many ways. For example, she uses Nina's equipment options instead of having a set of her own. Furthermore, unlike other characters, her stats increase rapidly even after reaching level 50. Actually, each character's stat growth values are stored in huge tables, but only eight of these tables exist. Bleu, being the ninth character, receives stat growth values from the enemy formation data that immediately follows, at 0x57df0. As a result, her stat gains far outpace any other character. Perhaps Bleu was a late addition to the game, which would explain why her implementation seems so clumsy.

The Shaman system is one the more unique features in this game. All Shamans give some sort of boost except for 'Seny' who appears as if she gives nothing. Inside the code shows that Seny is actually supposed to give a boost in the 'Luck' stat. It turns out that there is code to read the luck stat AFTER the fusing but the code that actually boosts the stat does not exist. What's more interesting is that the Shaman system has an unused feature that allows you to DECREASE stats at your choosing! It appears this function is completely unused but it works fully in-game.

Most of this text is unused but the 'SAN!BOF2' is used as a header in the saved game data.

There seems to be a bunch of unused spell descriptions for Ryu and his dragon forms! Although, the only real difference is the targeting.

The elements would be 'ice, fire, electric' and the target is 'All, Single, Sngl (Used in electric)'.

What's more interesting is that there's one even for G.Drgn!

As with the first Breath of Fire game. Breath of Fire II contains many name changes between the Japanese and English versions. The playable characters are listed below even if their name didn't change. 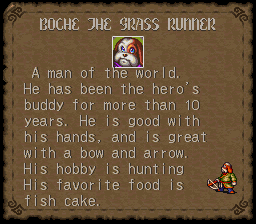 In the Japanese version, there are character bios after each character's introductory scene and before their battle demo. All the data does exist in the English version except for the code that fades the screen and initiates the next pieces. All the main display text is translated. It was most likely left out due to it overwriting all other information on the screen without properly clearing it causing some odd issues as the text wrote.

The English version removes the copyright info on the title screen because it includes it on a separate screen shown on boot.

In the Wii/Wii U Virtual Console version of the game, the Gold Fly's line is changed from "damn" to "darn".

The Wii and Wii U Virtual Console versions also have motion blur on all sprites and environments barring the player's party during field movement.

In the token game (available when the player chooses the "wood" carpenter), one line was removed from the instruction text:
「It's kind of like
[ToggleHighlight]Othello[ToggleHighlight].
The remaining text in the message seems to have been overwritten by changing the ROM such as in a hex editor, so a bit of the original message follows as garbage data. It was possibly removed as a trademark issue.

After dumping the script from the VC ROM and comparing to the SNES original, these two changes seem to be the only two.