Breath of Fire IV is the fourth and final entry to the standard Breath of Fire series. It features many of the same gameplay elements from the third game, but improves them all drastically. The tone of the game changed significantly as well, going from the bright, colorful, optimistic tone of its predecessor to a much darker, more "muted" setting. 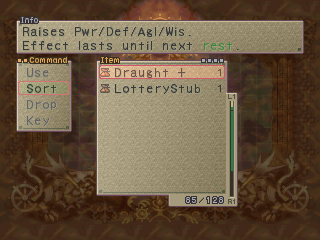 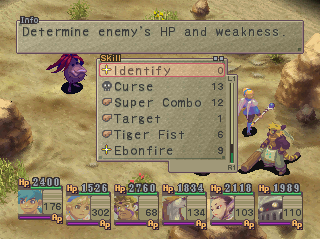 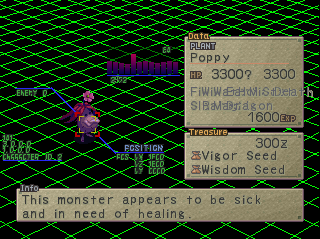 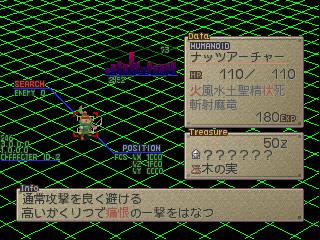 The enemy-scan spell from Breath of Fire III was slated to make a return appearance, but was cut. It's functional, and has unique animation, but the display looks slightly glitchy, as it appears to attempt to display all the attribute names in a too-small space, causing ugly text overlap.

Apparently, this spell could be learned by Scias in the Japanese version, but was cut from the North American release, presumably because the translation team couldn't think of a way to fix the text-bleeding. (Most likely, these attributes were represented by a single kanji in Japanese, in which they would line up perfectly.) 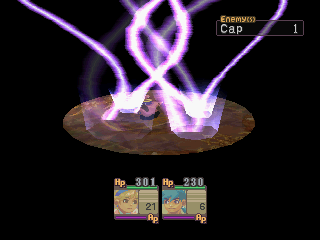 This spell isn't strictly "unused", as the Dragonne boss in the final dungeon is capable of using it. However, it was supposed to be player-usable, as well... but due to some questionable design, it simply can't be done.

By casting spells of differing elements in a sequence, it's possible to create "combo" magic, and including the powerful "dragon magic" usable by Ryu and Fou-Lu's various dragon forms in these combos ultimately leads to some of the game's strongest magic. The problem is, Mjollnir's combo is Wind Magic + Water Magic + dragon magic Pa Bing'ah...and the only one who can use Pa Bing'ah is Fou-Lu, who never joins the main team and never gets any allies. As a result, it's impossible to call upon the game's strongest Wind/Water spell without hacking.

Noritake's Town is an unused area in the game. It is not clear what the purpose of this area is. The AREA file for this area is AREAM019.EMI.

Two Rhoppes can be found next to a house. One sells items, including the King's Sword. Another doesn't do anything. Manillo trading can be done with one of the Manillo NPCs.

The message from the E3 demo remains in the final game.

A lot of development-related graphics were left behind in the textures of the final game.

There are a total of four cut scenes that were cut from the North American/European release due to violence or questionable content.

There's also a unique ?-Location in the Japanese release you can visit under specific conditions, found south from Mt. Glom. This was a cooperation with the Japanese Dengeki PlayStation magazine. To unlock this place you need to patch a save file on your Memory Card, using the disc that was distributed by volume 147 of the magazine. It's a Special Store with a Lottery, a free to take "Rusted Sword" and a small Shop inside it. The files still seem to be present in the US version of the game, but they got unused.