Bug Fables is an indie RPG that follows the adventures of three bugs as they search for a treasure said to bring immortality. The game features gameplay mechanics heavily inspired by the Paper Mario series.

There are a few rooms in the game that are completely inaccessible in a normal playthrough but can be accessed through an edited save file or the test room's room change NPC. 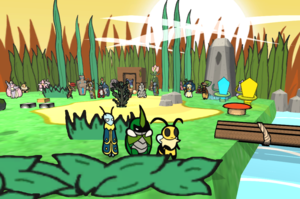 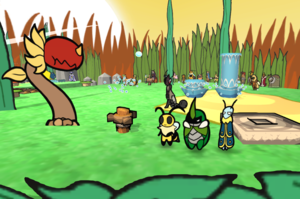 This room uses the model and floor textures of the main room from the prototype version of the game. There is an exit on the west side, and exiting the room sends the player to the Ant Mines.

On the west side of the room, there are NPCs that allow the player to change their current party, items, medals, experience points, stats, skills, save name, Chompy name, and room ID. There is another NPC that allows the player to view the IDs of items, medals, skills, and rooms. There is even a shop, but attempting to enter it will softlock the game. Certain NPCs can also softlock the game.

There are also various objects here, such as the save crystals, pressure plates, signs, a moveable rock, and a cuttable bush.

On the east side of the Test room, there are NPCS that allow the player to warp to certain events in a Chapter. Near the south, there is a Mother Chomper that the player can talk to that offers unique battles. In the middle of this side, there are passive bandits and ruffians. Like the other side, there are various interactable objects.

In the demo, this room housed a Zombiant that allowed the player to re-fight the Chapter 1 boss. It was accessed by entering Snakemouth Den's big door. Although the room was later replaced by Upper Snakemouth, it is still present in the final game.

Enemy_Tattle.txt contains this message from the developer for an enemy that is unable to be spied:

The spy immediately following it contains this message:

This enemy only appears in the test room. He has 0 defense, but 500 health. He acts as a dummy, so he will heal 500 HP to himself and 99 TP to the player every turn, unless he is frozen.

The following text files contain Portuguese dialogue and text. This implies that a Portuguese translation was intended for the final release of the game, but never finished.

Enemy_Tattle.txt contains even more unused text for enemies who can't normally be spied:

An unused sound for charging an attack.

The sound of the leaf rustling that plays before a battle.

A short version of BeeFly2.

The sound effect for blocking an attack. Used in the demo versions, but not in the final game.

An alternate sound for bouncing on a spring.

An alternate version of CrowdChatter. The crowd sounds more humanlike.

The sound of an enemy dying. Used in the demo versions, but not in the final game.

An unused sound for Deadlander Omega. 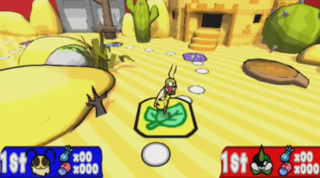 There are unused sprites and text that suggest there was going to be a Mario Party styled arcade game. Additionally, the developer has released a short video showing off the basic functionality of the game.

These sprites were found on the sprite sheet that contained the other, used arcade games.

In the text files, there is an arcade game referred to as "Kart Kart". No kart game is ever seen in the arcade.