Pangea's biggest hit yet, this all-ages 3D platformer was bundled with iMacs and iBooks, ported to Windows (twice), and followed up with a sequel.

Just don't tell the developer that it had anything to do with A Bug's Life or Antz.

LawnSongOld.aiff contains a demo version of the music for Levels 1 and 2. The music is louder, lacks the twinkling notes, and fades toward the end.

On the main menu, hold down F10 (on Mac version 1.2.0 or newer) or Tilde and click on the "Start" icon in the main menu. This brings up a dialog box that allows the player to go to any level. 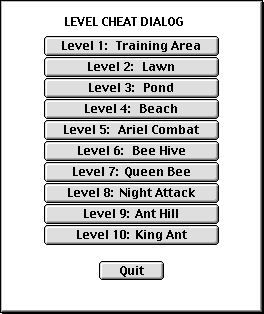 While in the game, press Command (Mac) or Tilde (Windows) along with one of the following keys to activate the corresponding effect: